The Largest Power Plant in North Dakota Has Been Sold

North Dakota’s 1,150-megawatt power plant has been sold, preventing hundreds of workers from losing their jobs.

Rainbow Enegry Marketing Company assumed ownership of Coal Creek Station this week after almost a year of negotiations. The Bismark-based company has two subsidiaries – Rainbow Energy Center, which will operate the power plant, and Nexus Line LLC, which acquired the electricity transmission delivering system that connects North Dakota to Minnesota.

Both sales finailized on May 2. Coal Creek Station began operating in 1979.

The state’s leadership celebrated the sale of the plant, which was facing closure after its previous owner, Great River Energy, announced in 2020 that it had become a financial burden.

Great river supplied electricity to between 700,000 and 1.7 million people across 28 rural communities in Minnesota.

“This is truly a landmark day and a huge victory for the 650 workers here at Coal Creek and Falkirk Mine, for the residents of McLean County, for the entire state of North Dakota and for U.S. energy security and electrical grid reliability,” North Dakota Governor Doug Burgum said in a statement. “By preserving the reliable, affordable electricity that coal provides while also incorporating renewable power and innovative carbon capture, storage and utilization, this project will be a model of clean baseload power for the world.”

He thanked Rainbow Energy Center’s President Stacy Tschider and Chairman Loren Kopseng for “their risk-taking entrepreneurship that made this sale possible.”

“The benefits of this sale will be felt far and wide, most importantly by the Coal Creek and Falkirk workers and their families and the customers who benefit from a stable electrical grid in North Dakota, Minnesota and beyond,” added Lieutenant Governor Brent Sanford. “We’re thankful to the industry, the state Legislature and our congressional delegation for continuing to find a viable path forward for North Dakota’s abundant lignite coal.”

Without the sale, the power plant and neighboring coal mine would have closed in the second half of 2022. The pending sale to Rainbow Energy Center was announced on June 30, 2021.

Environmental group The Sierra Club, which is based in California, objected to the sale during August of 2021. The organization said the process had “lacked transparency and engagement,” reported US News and World Report.

According to The Star Tribune, “Great River will also purchase 1,050 megawatts of power from Coal Creek — almost all of its output — through early 2023, and will buy 350 megawatts annually for the following eight years.”

The company has also estimated an 80% reduction in carbon emission by 2032 due to increasing its renewable energy production. 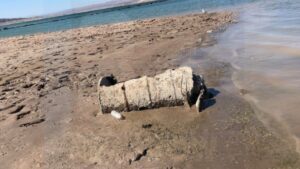 Body Found In Barrel On The Shrinking Shores Of Lake Mead