The verdict came from an Arkansas jury on Thursday. Duggar now faces up to 20 years in prison and a $250,000 fine on each count.

During the trial, prosecutors presented evidence of a computer at Duggar’s used-car dealership in Springdale, Arkansas. They said Duggar used the computer to access explicit photos and videos of young children being sexually abused. Experts testified that the computer was split into two operating systems, one for business and a “hidden” one for the illegal material, the Associated Press reported.

A senior crime forensic analyst retained by the prosecution said the password for the secret side was similar to passwords Duggar had used in the past.

The defense team argued that another person downloaded the material to the computer, claiming that a hacker remotely accessed Duggar’s internet. They said Duggar wasn’t technologically savvy enough to split his computer in two, and reportedly emphasized that no child pornography was found on Duggar’s phone or home laptop.

An opposing opinion was detailed in a multi-episode podcast created by a former family friend, entitled “I Pray You Put This Journal Away.” The podcast details the genius of Duggar and his life-long journey as an expert at technology and computer nuances. The podcast also covers prior events of Duggar’s sexual misconduct covered up by family and members of their church.

Duggar’s attorney told the jury, “If you like a mystery, then this is the case for you. This is a classic, old-fashioned whodunit.”

In 2015, the tabloid In Touch Weekly uncovered police reports that said Duggar was accused of molesting multiple girls when he was a teenager. Jim Bob and Michelle confirmed he had inappropriately touched four of his younger sisters and a babysitter.

In a pretrial hearing last week, a family friend of the Duggars testified that Duggar admitted to her in 2003 that he had molested four girls, the AP reported. Duggar’s lawyers filed a motion to keep the testimony out of the trial, but it was rejected by a judge who said, “The prior-act evidence is probative of defendant’s sexual interest in underage children and his propensity for exploiting young girls.”

Last month, Anna gave birth to their seventh child. A judge ruled that although Duggar was not allowed to have contact with minors while he was awaiting trial, he could see his kids if Anna was also present.

Late Thursday the Duggars released the following statement through their website:

“This entire ordeal has been very grievous. Today, God’s grace, through the love and prayers of so many, has sustained us. Our hearts and prayers are with anyone who has ever been harmed through CSAM.

“In the days ahead, we will do all we can to surround our daughter-in-law Anna and their children with love and support. As parents, we will never stop praying for Joshua, and loving him, as we do all of our children. In each of life’s circumstances, we place our trust in God. He is our source of strength and refuge. Thank you for your prayers.” 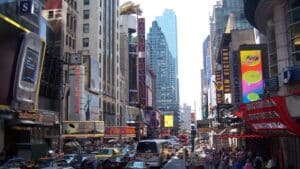