The Canadian college said Peterson’s license to operate as a psychologist could be suspended unless he participates in social media communication training, Peterson revealed in a Tuesday tweet thread.

“The Ontario College of Psychologists has demanded that I submit myself to mandatory social-media communication retraining with their experts for, among other crimes, retweeting [Pierre Poilievre] and criticizing [Justin Trudeau] and his political allies,” Peterson tweeted Tuesday morning. “I have been accused of harming people (although none of the complainants involved in the current action were clients of mine, past or present, or were even acquainted with any of my clients).”

“I mentioned yesterday that I wanted to make the details of the accusations made against me by the Ontario College of Psychologists public,” Peterson wrote. “Here’s a string beginning that process.”

I mentioned yesterday that I wanted to make the details of the accusations made against me by the Ontario College of Psychologists public. Here's a string beginning that process.

“I plan asap to make all the allegations and my responses as public as possible while abiding by the ethical and legal restrictions on doing so (and least insofar as those rules are clear and commensurate with truth and a reasonable defence),” he continued.

“I have formally indicated my refusal to comply,” Peterson said, providing screenshots of CPO’s “Acknowledgement and Undertaking” form.

Here's the last page of the required "undertaking." pic.twitter.com/svwbDveMz8

The college required Peterson to work with Dr. Erika Abner, LLM, LLB, Ph.D., or Gail Siskind, RN, MA, “to review, reflect on, and ameliorate [his] professionalism in public statements.”

Within 10 days Peterson must choose a coach between Abner or Sisking and complete the Coaching Program within six months, according to CPO’s letter.

“If the coach provides any unfavorable information about [Peterson’s] practice, the Registrar may proceed to investigate new concerns arising,” CPO’s letter details.

Peterson is also responsible for “any and all costs” associated with the College’s Undertaking including “time spent meeting with the coach, time for the coach to review files and other materials, and the coach’s travel time.”

“In its wisdom, CPO decided to pursue these complaints even though they could have dismissed them as vexatious,” Peterson said Tuesday. “And even though many of them falsely claimed that they were or had been clients of mine and were allowed by CPO to have their complaints investigated despite this falsehood.”

“We are now in a situation in Canada under [Justin Trudeau] where practicing professionals can have their livelihoods and public reputations threatened in a very serious manner for agreeing with the Official Opposition and criticizing major government figures,” he continued. “If I comply the terms of my re-education and my punishment will be announced publicly.”

Peterson warned Canadians that physicians, lawyers, psychologists and other professionals were “intimidated by their commissar overlords” to be truthful with clients.

“This means that your care and legal counsel has been rendered dangerously unreliable.”

“To reiterate: I face public disgrace, mandatory political re-education, disciplinary hearing and potential loss of my clinical licensing for agreeing with [Pierre Poilivere] and criticizing out standing [Prime Minister Justin Trudeau],” Peterson concluded. “I am willing (if COP concurs), which they won’t to make absolutely every word of this fully public so that everyone can decide for themselves what is actually happening.” 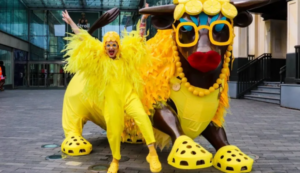