'DragCon is an all-ages, family friendly event and all are welcome at RuPaul’s DragCon UK' says the event's website

Plastic shoewear company Crocs has elected to sponsor a fashion show for children at a drag convention, prompting outrage among many of the brand’s fans.

The company is working with the BBC show RuPaul’s Drage Race UK to host the event at RuPaul’s DragCon UK, which takes place at the ExCeL center in London from Jan. 6 to Jan.8.

“RuPaul’s DragCon celebrates the power of authentic self-expression, an idea that lives at the heart of our brand, and we stand with those who bravely inspire others to embrace what it means to truly Come As You Are,” said Yann Le Bozec, Crocs’ VP Marketing EMEA-LATAM & Global Lead Distributor Marketing, per The Industry Fashion. “We believe that personal expression is an inherent choice and recognising what makes each one of us unique is part of our commitment to inclusivity everywhere.”

In addition to sponsoring the children’s event, Crocs will release an exclusive Jibbitz charm at the convention. The plastic item used to decorate the namesake footwear is known as the RuPeter and is based on the BBC Blue Peter design.

According to the event’s website, the convention center’s layout will include a “Kid Zone” with multiple Drag Queen Story times and a Telebubies Meet & Greet. The Teletubbies will also be performing on the convention’s main stage at 3:00 PM on Jan. 7. The DragCon map labels the Kid Zone as “Teletubbyland.”

The Children’s Fashion Show is scheduled for 1:00 pm on Jan. 8 on the main stage. This event is organized by World of Wonder Presents Plus which describes itself on Instagram as the “streamer of all things drag!”

“WOW Presents Plus is the only streaming service featuring multiple RuPaul’s Drag Race franchises*, Painted with Raven, Werq The World, UNHhhh, and hundreds of other World of Wonder originals, documentaries, specials, and LGBTQ+ programming, all ad free,” states the company’s website.

Children are welcome at DragCon and may even qualify for free access.

“DragCon is an all-ages, family friendly event and all are welcome at RuPaul’s DragCon UK. Kids 8 and under are free when accompanied by an adult with a ticket. The Kids ticket will grant them the same access to DragCon as the adult’s ticket level,” reads the FAQ section of the event’s website.

Children have attended RuPaul’s DragCon in years past. In 2020, the LibsofTikTok Twitter account shared videos of children dancing onstage at the event at the Los Angeles Convention Center while on-lookers threw money at them.

Other sponsors of the event include Anastasia Beverly Hills Makeup and Audible.

“Hit them with your catwalk, kids,” read the now-removed caption. “Bring it to the runway with your parent/guardian for the #DragConUK 2023 Kids Fashion Show, Sunday 8th January on the @crocseurope Main Stage!”

Teletubbies announced its children’s characters would be at DragCon on Dec. 9 on Instagram. The caption included a reminder that “kids under 8 are FREE.”

After news of DragCon’s event for children, some Croc owners took to social media to share videos burning the shoes as a demonstration of their opposition to the company’s role in the event.

Crocs has released several pride collections and works with drag queens to promote their shoes on social media. 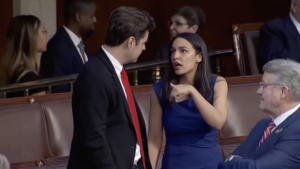