Joe Rogan, comedian and host of “The Joe Rogan Experience,” speculated over whether or not he should sue CNN for claiming that he took a “livestock drug despite warnings” to combat COVID-19.

On Sept. 1, Rogan announced he had contracted the virus and “immediately threw the kitchen sink at it.”

“[We used] all kinds of meds—  monoclonal antibodies, ivermectin, Z-pak, prednisone — everything,” he said. “And I also got an NAD drip and a vitamin drip and I did that three days in a row.”

Rogan claimed that he felt “great” after three days of treatment: “I really only had one bad day,” he said. “Sunday sucked, Monday was better, Tuesday felt better than Monday and today I feel good.”

The same day as Rogan’s announcement, CNN ran a segment claiming that the hugely popular broadcaster was using “a drug used for livestock. The FDA and the CDC warned against using to treat COVID,” CNN’s Erin Burnett said.

He added: “He’s promoting kind of a crazy jumble of, you know, sort of folk remedies and internet-prescribed drugs. It’s, again, dangerous now.”

But on his first post-recovery podcast appearance on Sept. 7, Rogan asked, “Bro, do I have to sue CNN? They’re makin’ s*** up. They keep saying I’m taking horse de-wormer. I literally got it from a doctor.”

“They must know that’s a lie … If the internet says it, who cares? But CNN is saying it!” Rogan exclaimed, after pointing out that ivermectin won the 2015 Nobel Prize for Physiology or Medicine. 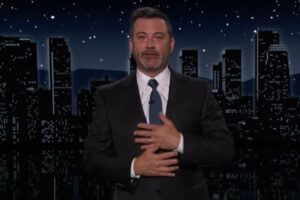