President Joe Biden responded to a question about Democrat efforts to defund police by asking if there are “Republicans who think we’re sucking the blood out of kids?”

The president was returning from Cincinnati, where he had participated in a town hall on CNN, when he stopped to speak to the press on the South Lawn of the White House.

During the CNN broadcast, Biden had claimed that Democrats were not anti-police.

“I don’t know any community, particularly the communities that are in the most need and the poorest and the most at risk, that don’t want police. They want police, though, to look at them as equals. They want police to treat them in that way,” the president said.

Speaking to a reporter upon his return to DC on Marine One, Biden was asked to clarify his claim that there is no one in the Democratic Party who is anti-police.

“I didn’t say that,” Biden responded.

“I know that you said you don’t want to defund the police —” the reporter began again.

Biden interjected that he said “that is not the Democratic Party’s position,” despite the party’s clear support of the Black Lives Matter movement — which explicitly calls for defunding the police.

“I’m the Democratic Party; I am President. So is the Speaker of the House and so is the –- the Majority Leader. We are not the defunding the police,” Biden continued.

“Okay. And are there people who — in the Democratic Party, who want to defund the police?” the reporter continued to press.

Clearly flustered, the president changed the subject by bringing up a fairly fringe conspiracy theory that powerful elites ingest a chemical compound called Adrenochrome, which is derived from the oxidation of adrenaline, that they harvest from tortured children.

“Are there people in the Republican Party who think we’re sucking the blood out of kids?” Biden snapped.

“I’m not sure,” the reporter responded, as Biden walked off.

The jaw dropping full exchange has been transcribed and published on the White House website. 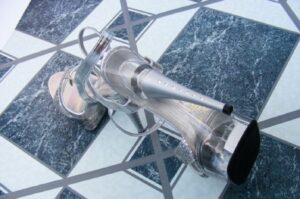