The video began with footage of Trump saying, “nobody has ever done what we’ve done over the last four years.”

Next, a montage of reporters slamming the former president’s performance in the White House began to play as a list of “failings” appeared on the screen.

“Two years ago, when I left office, the United States stood ready for its golden age,” he said, before boasting of his accomplishments in the White House. “The world was at peace, America was prospering, and our country was on track for an amazing future— because I made big promises to the American people and, unlike other Presidents, I kept my promises.”

Trump said the Biden administration has turned the US into a “failing nation.”

“It does not have to be this way,” Trump said.

“In order to make America great and glorious again, I tonight am announcing my candidacy for president of the United States,” Trump said.

TRUMP: “I am, tonight, announcing my candidacy for the Presidency of the United States.” pic.twitter.com/WKQdcq1Fhl

The former president said that “I will fight like no one has ever fought before.”

President Biden is currently in Bali, where he is attending the final day of the G20 summit. 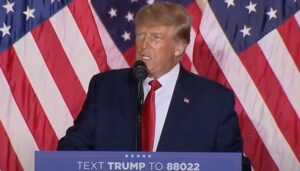