'Where appropriate, we will refer men or individuals who identify as trans women to other appropriate services’ said a spokesperson for Beira's Place

Rowling said survivors should have the option to receive women-centered and women-delivered care, per the BBC.

“I founded Beira’s Place to provide what I believe is currently an unmet need for women in the Lothians area,” said Rowling. “As a survivor of sexual assault myself, I know how important it is that survivors have the option of women-centered and women-delivered care at such a vulnerable time. Beira’s Place will offer an increase in capacity for services in the area and will, I hope, enable more women to process and recover from their trauma.”

The center is set to open in 2023 and has upset some transgender activists and advocates by noting that its services will be offered only to biological women.

“We believe women deserve the reassurance that they will not encounter anyone who is male when using our services,” a spokesperson for Beira’s Place said in a statement, per UK Dialy News. “Where appropriate, we will refer men or individuals who identify as trans women to other appropriate services.”

Beira’s Place is legally allowed to exclude males under the 2010 Equality Act.

While discussing her new venture with Suzanne Moore, Rowling said she was inspired to take action after the chief executive of Edinburgh Rape Crisis Centre suggested rape survivors could “reframe” their trauma and have “a more positive relationship with it” while appearing on the Guilty Feminist podcast.

“I was climbing the walls. It’s not a political thing to me; this is personal,” Rowling said. “And then, after two days, I had the lightbulb moment and I thought, ‘I don’t have to pace around my kitchen ranting. I can actually do something about this.’ And that’s how it started.”

“I have no irrational fear of or hatred towards trans people in the slightest – as, God knows, I’ve said so many times,” she added. “But if you’re going to say it’s ‘hate’ not to believe in a gendered soul, then we cannot have a discussion.”

The author has previously been accused of being transphobic by transgender advocacy organizations, including Gay & Lesbian Alliance Against Defamation (GLAAD) which claims Rowling takes part in anti-trans activism.

Rowling, who lives in Edinburgh, is covering the center’s cost. It is not a charity and does not take donations.

Scottish lawmakers are currently debating the Gender Recognition Act, which would end the requirement that an individual is diagnosed with gender dysphoria in order to receive a gender recognition certificate. Opponents of the bill, including Rowling and other members of the Beira’s Place board, have said the policy infringes on women’s rights and could be detrimental to single-sex spaces such as women’s prisons and shelters. 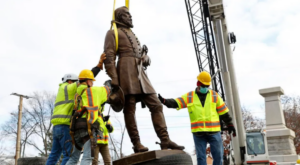