Late-night host Jimmy Kimmel has admitted to losing at least half of his fanbase for persistently attacking former President Donald Trump throughout his presidency.

The Jimmy Kimmel Live! host discussed the matter on Thursday’s episode of the Naked Lunch podcast.

Kimmel stated that ABC executives “hinted” at him to lay off the partisan attacks. He also acknowledged that being more “neutral” would be better for ratings — but he declined.

“I just said, ‘If that’s what you want to do, I understand and I don’t begrudge you for it, but I’m not going to do that,’” Kimmel said. He said he told them that, “if you want somebody else to host the show, then that’s fine. That’s OK with me. I’m just not going to do it like that.”

The late-night host claimed that eventually, the executives gave up because they could tell he was “serious.”

Kimmel said that he couldn’t have lived with himself if he had attempted to be more balanced and less partisan.

“I love this country too. That flag doesn’t belong to them. This is ours. And when I see somebody coming in and ruining it I’m going to say something about it,” Kimmel stated.

Seeming to paint himself in a heroic light, Kimmel explained that “there’s a sacrifice you make when it comes to your audience and you could do pretty well if you just stayed down the middle.”

Last month, Fox News reported that in 2016, Jimmy Kimmel Live averaged 2.2 million viewers. By 2022, the show had plunged to 1.5 million, losing more than a third of its audience.

“The shrinking audiences have been systemic among the liberal comics,” the report added. “CBS’ The Late Late Show starring James Corden has lost 36% of its viewers since 2016, now averaging an audience of 819,000. NBC’s Late Night with Seth Meyers has slashed nearly half of its viewers between 2016 and 2022, going from roughly 1.5 million to 786,000. HBO’s Last Week Tonight with John Oliver has lost nearly 60% of its viewers since 2017, drawing an average 528,000 viewers this year.”

Kimmel acknowledged the ratings drop during his interview, saying that “no one is watching network television anymore.” 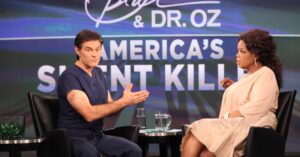