United States First Lady Jill Biden and Canadian Prime Minister Justin Trudeau both made appearances in Ukraine over the weekend.

Neither appearance had been announced beforehand.

Biden met with Ukrainian First lady Olena Zelenska at a school on Mother’s Day, May 8.

“I thought it was important to show the Ukrainian people that this war has to stop and this war has been brutal and that the people of the United States stand with the people of Ukraine,” Biden said to Zelenska during the meeting.

“We understand what it takes for the U.S. first lady to come here during a war when military actions are taking place every day, where the air sirens are happening every day — even today,” she said.

“We all feel your support,” Zelenska added. “We all feel the leadership of the U.S president. But we would like to note that Mother’s Day is a very symbolic day for us. Because we also feel your love and support during such an important day.”

The Ukrainian first lady and her two children have been kept in an undisclosed location since Russia invaded the country on Feb. 24.

President Biden was reportedly golfing near his home in Willington, Delaware, during his wife’s unannounced visit to Ukraine.

Canadian Prime Minister Justin Trudeau also made a surprise visit to Ukraine on May 8.

Trudeau visited the town of Irpin before holding a joint press conference with Ukrainian President Volodymyr Zelensky in Kyiv.

Irpin Mayor Olexander Markushyn shared photos on Telegram of the Canadian politician walking through the city, noting Trudeau was able to see “all the horrors that the Russian invaders had done to our city.”

“I sincerely thank Mr. Trudeau for the support that Canada provides to Ukraine today,” he wrote. “We believe in further cooperation of our countries and on the reconstruction of Ukrainian cities after our victory.”

While speaking in Kyiv, Trudeau announced additional military support for Ukraine, including drone cameras, satellite imagery and ammunition, per Axios.

He also announced the Canadian embassy would reopen and his government would end tariffs on imports from Ukraine for the next year.

“We’re here to show our support for Ukraine and its people,” Trudeau wrote on Twitter. 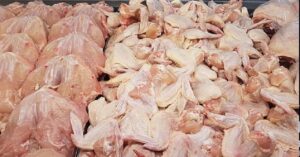 Over a Half Million Pounds of Frozen Chicken is Being Recalled