Jen Psaki Says Admin Opposes ‘No-Fly Zone’ in Ukraine, ‘Not Going to Have a Military War with Russia’

Ukraine’s President Volodymyr Zelensky has been urging President Joe Biden and NATO to impose a “no-fly zone” over “significant parts” of the country, according to a report from Axios.

Zelensky claimed that Ukraine “can beat the aggressor” if the Western allies “do their part.”

“The sanctions are heading in the right direction. In addition to disconnecting the Russian Central Bank from SWIFT and providing more Stingers and anti-tank weapons, we need the West to impose a no-fly zone over significant parts of Ukraine,” Zelensky said. “Ukraine can beat the aggressor. We are proving this to the world. But our allies must also do their part.”

Speaking to MSNBC’s chief White House correspondents Kristen Welker and Peter Alexander on Monday, Psaki ruled out the idea for the military involvement required to enforce a “no-fly zone” over the country.

“What that would require is implementation by the U.S. military. It would essentially mean the U.S. military would be shooting down planes, Russian planes. That is definitely escalatory. That would potentially put us in a place in a military conflict with Russia,” Psaki said. “That is not something the president wants to do.”

“He is not sending U.S. Forces — men and women who fight for our military — into Ukraine to fight a war with Russia,” she added. “We are not going to have a military war with Russia with U.S. Troops, and he thinks it’s vitally important, and first and foremost important, to be direct with the public about that.”

“We are not going to have a military war with Russia with U.S. troops,” White House Press Secretary Jen Psaki says. pic.twitter.com/7oZlvPGv7w

Likewise, NATO has said they also have no intention of moving into the conflict either on the ground or through imposing a “no-fly.”

“We have no intentions of moving into Ukraine neither on the ground or in the airspace,” NATO Secretary-General Jens Stoltenberg told MSNBC on Monday. “We have a responsibility to make sure that this doesn’t spiral out of control that escalates even further into concern for full-fledged war in Europe involving NATO allies.”

A minority of war hawks in DC have lobbied for a “no-fly,” most vocally Rep. Adam Kinzinger.

Kinzinger tweeted on Friday that the U.S. should “declare a #NoFlyZone over Ukraine” to “give the heroic Ukrainians a fair fight.”

The statement was widely condemned by lawmakers from both parties. 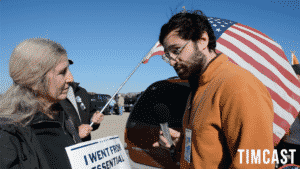