Jeffrey Epstein accomplice Ghislaine Maxwell has been transferred to a low-security federal prison in Florida.

Maxwell was convicted of five charges, including sex trafficking of minors, relating to bringing young girls to Epstein and his friends to sexually abuse. She was sentenced to 20 years in prison.

Maxwell has now been moved to the Tallahassee Federal Correctional Institution to serve her time, where she will be able to take craft classes, Pilates, and yoga. She had filed dozens of complaints about the conditions at the Metropolitan Detention Center in Brooklyn, where she was housed since her arrest in 2020.

Fox News reports that at the “cushy” new prison, “Maxwell will be able to spend up to $360 a month at the commissary, which offers toiletries like a collagen elastin facial for $6.22 and snacks, including smoked gouda spread for $1.80 and Nutella for $4.90.

According to their report an inmate stated, “Everybody can walk, even women who killed their children or other people’s children. Nobody cares. And nobody cares about informants either.” Another respondent explained, “Everyone and anyone can walk the yard.”

Maxwell had asked to be sent to FCI Danbury in Connecticut, the prison where the hit book and television show Orange is the New Black took place.

Epstein was found dead in his prison cell in New York’s Metropolitan Correctional Center on August 10, 2019. Though his death was ruled a suicide, many have questioned that determination due to the powerful figures that could have potentially been implicated by him. Among his alleged friends and guests at the infamous “Lolita Island” that he owned were Prince Andrew and former President Bill Clinton.

As Timcast previously reported, lawyers representing Maxwell alleged that her cellmate at MDC Brooklyn said that she was offered money to kill the former socialite.

“One of the female inmates in Ms Maxwell’s housing unit told at least three other inmates that she had been offered money to murder Ms Maxwell and that she planned to strangle her in her sleep,” the filing said. They alleged that the woman bragged that the payout was significant enough to be worth “an additional 20 years’ incarceration.” 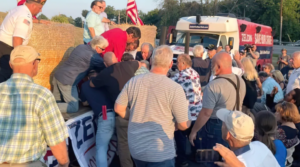