Lawyers representing Ghislaine Maxwell allege that her cellmate has claimed that she was offered money to kill Jeffrey Epstein’s partner in crime.

The claim was made in a court filing on Wednesday, in which Maxwell’s legal team argued for a lighter sentence.

“One of the female inmates in Ms Maxwell’s housing unit told at least three other inmates that she had been offered money to murder Ms Maxwell and that she planned to strangle her in her sleep,” the filing said, according to a report from Fox News. They alleged that the woman bragged that the payout was significant enough to be worth “an additional 20 years’ incarceration.”

“This incident reflects the brutal reality that there are numerous prison inmates who would not hesitate to kill Ms Maxwell — whether for money, fame, or simple ‘street cred,'” Maxwell’s lawyers wrote.

The inmate was subsequently moved to another unit of the prison.

“Ghislaine Maxwell is not an heiress, villain, or vapid socialite. She has worked hard her entire life. She has energy, drive, commitment, a strong work ethic, and desire to do good in the world,” the lawyers claimed in the filing, stressing that she had a “difficult, traumatic childhood with an overbearing, narcissistic, and demanding father.”

Maxwell was convicted in December on five charges, including sex trafficking of minors. Her sentencing hearing is scheduled for June 28.

Epstein was found dead in his prison cell in New York’s Metropolitan Correctional Center on August 10, 2019. Though his death was ruled a suicide, many have questioned that determination due to the powerful figures that could have potentially been implicated by him. Among his alleged friends and guests at the infamous “Lolita Island” that he owned were Prince Andrew and former President Bill Clinton.

Prince Andrew was recently barred from using the title of “Royal Highness” over his involvement in the Epstein scandal.

In January, as Timcast previously reported, Lady Victoria Hervey, the ex-girlfriend of Prince Andrew, claimed that Clinton and late pedophile were “like brothers.”

The claims from Hervey, the daughter of the 6th Marquess of Bristol, were made in a documentary titled Ghislaine, Prince Andrew and the Pedophile.

“Clinton was definitely very close to Jeffrey,” Lady Hervey said in the film. “I don’t know if you saw the paintings that were in Jeffrey Epstein’s house? One of them being a portrait of Bill Clinton wearing the dress that Monica Lewinsky wore when they had the affair.”

The well-connected socialite added, “so yeah, he was super close to Jeffrey Epstein. They were like brothers, you know, and he was close to Ghislaine as well.”

Hervey said that she does not think that Epstein would have been as successful with his efforts to lure in young girls without Maxwell, comparing them to “Batman and Robin.”

“I don’t think Jeffrey could have done any of it without Ghislaine,” she said. “It was kind of like a Batman and Robin, and they were a double act.”

Though Maxwell was a prominent guest at Chelsea Clinton’s wedding, the former president has claimed that he was not very close to Epstein.

A representative for Clinton previously told the New York Post that the former president “knows nothing about the serious crimes Jeffrey Epstein pleaded guilty to.” The paper reports that they also claimed the men met only a “handful of times,” and that Clinton “not spoken to Epstein in well over a decade” prior to his death. 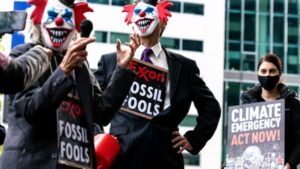 Exxon Pushes Back Against Biden on Gas Prices