The Amazon founder and three others traveled over 60 miles above the Earth.

The richest man in the world left Earth today with a dutch teenager and a Texas-based aviation pioneer.

The pair became the youngest and oldest people in space, respectively.

Bezos, his brother Mark, Oliver Daemen, 18, and Wally Funk, 82, launched on Tuesday in West Texas on the 52nd anniversary of the Apollo 11 moon landing.

Funk is “one of 13 female pilots who went through the same tests as NASA’s all-male astronaut corps in the early 1960s but never made it into space,” noted AP News.

Daemen’s father, Joes Daemen, took part in the auction where a mystery winner won a seat on the flight for $28 million.  The elder Daemen is the founder of Somerset Capital Partners, a real estate private equity firm. When the original winner opted for a later flight, Daeman’s father paid an undisclosed amount for the seat which he offered to his son.

Bezos became the second billionaire in space after Richard Branson launched into space on July 11th in New Mexico.  On Instagram, he wrote, “Ever since I was five years old, I’ve dreamed of traveling to space.”

Bezos founded his space company, Blue Origin, in 2000 in Kent, Washington. The rocket used on Tuesday was used in two previous space demonstrations, the company said in a statement. Boosters that can be recycled for future launches are a key component of Bezos’s plan to make space travel cheaper.

The New Shepard, which was named for the first American astronaut, reached an altitude of about 66 miles and accelerated to three times the speed of sound, before landing upright under parachutes.  Inside, the passengers got to float weightlessly for several minutes.

A video of the landing was published on the company’s Twitter page.

Oliver Daemen is considered Blue Origin’s first paying customer. Their direct competitor, Branson’s Virgin Galactic, already has over 600 reservations. The companies are leaders in the global effort to launch the space tourism industry.

Differences between the two companies are apparent. Branson’s rocket had a pilot whereas Bezos’s ship was completely automated. Virgin Galactic, founded in 2004, launched first — but Blue Origin went higher. Notably, fellow billionaire Elon Musk’s SpaceX was the first private company to send humans into space and to the International Space Station in 2020.

The expansion of the private space travel world is set to continue. Bezos has plans “for a lunar lander called Blue Moon, which the company said would be ready in 2024 and would eventually help establish a ‘sustained human presence on the moon,” Business Insider reports.

Oliver Daemen will attend the University of Utrecht to study physics and innovation management. Blue Origin CEO Bob Smith said in a statement online, “This marks the beginning of commercial operations for New Shepard, and Oliver represents a new generation of people who will help us build a road to space.” 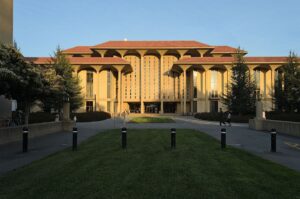 A Second Major Company Will Shut Down its Student-Loan Services