International Criminal Court chief prosecutor Karim Khan has announced that the ICC will be opening an investigation “as rapidly as possible” into potential war crimes and crimes against humanity committed by Russia before and during its invasion of Ukraine.

Khan cited previous investigations by the ICC into alleged crimes committed by Russia before the invasion, and then explained, “there is a reasonable basis to believe that both alleged war crimes and crimes against humanity have been committed in Ukraine in relation to the events already assessed during the preliminary examination by the Office.”

He added that “given the expansion of the conflict in recent days, it is my intention that this investigation will also encompass any new alleged crimes falling within the jurisdiction of my office that are committed by any party to the conflict on any part of the territory of Ukraine.”

The ICC has already conducted preliminary probes into alleged crimes committed in Ukraine beginning in 2013. In December 2020, then-ICC Prosecutor Fatou Bensouda said that the probes indicated “a broad range of conduct constituting war crimes and crimes against humanity within the jurisdiction of the Court have been committed” in Ukraine. At the time, however, ICC prosecutors had not yet gained permission from judges to open a full-scale investigation into the alleged crimes.

The news comes amid reports that Russia has been using illegal cluster bombs and vacuum bombs during its invasion of Ukraine.

According to Human Rights Watch, a Russian missile carrying a cluster munition hit a hospital in Vuhledar, Ukraine, on February 24, 2022.

“The attack killed four civilians and injured another 10, six of them healthcare workers, and damaged the hospital, an ambulance, and civilian vehicles,” Human Rights Watch reported.

According to U.N. human rights chief Michelle Bachelet, her office has confirmed that 102 civilians, including seven children, have been killed during Russia’s invasion and 304 others wounded in Ukraine since Thursday. Bachelet warned that the true number was likely far higher. 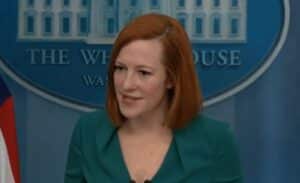 Psaki: Biden Will Discuss Inflation, Build Back Better In State Of The Union