WikiLeaks founder Julian Assange has tested positive for COVID-19, according to his wife Stella Assange.

Assange, 51, has been held at Belmarsh prison in London since April 2019, as the US government works to extradite him.

The award-winning publisher has been placed on round the clock lockdown in his cell.

“Julian was feeling unwell last week but started feeling sick on Friday,” Stella Assange told the Press Association news agency, according to a report from CBS News. “He started coughing and had a fever. He was given some paracetamol. He tested positive for COVID on Saturday.”

She added, “the next few days will be crucial for his general health. He is now locked in his cell for 24 hours a day.”

Julian has tested positive for COVID. Belmarsh has put him in 24h lockdown. He will remain isolated in his cell 24h/day until further notice.

Post your messages to help him boost his spirits below, so I can read them to him when he calls. #FreeAssangeNOWhttps://t.co/sLNutSkneK pic.twitter.com/FQPYvmSjep

Assange has a chronic lung condition and suffered a stroke last year.

On Saturday, thousands of supporters surrounded Parliament demanding his release.

If we believe in free speech, then Julian Assange should be free from Belmarsh prison.

Thank you to the thousands of people who formed a human chain around Parliament to oppose his extradition, and stand up for independent & democratic journalism everywhere. pic.twitter.com/8tbnJDKNPs

His wife and children were also in attendance.

Last year, UK Judge Vanessa Baraitser denied an extradition request by the US government because Assange would not be prevented from committing suicide in our prison system.

The judge’s ruling was overturned in an appeal by the US government in December, prompting Assange’s legal team to appeal to the UK’s highest court for an appeal of their own.

Assange faces charges in the US under the Espionage Act for his publication of the Iraq and Afghan War Logs. If convicted, he could face a maximum sentence of 175 years in prison for publishing the leaked materials. 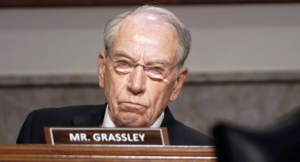