The crossing was filmed where reporters convened for the event

The event took place in front of the border fence in Yuma, Arizona.

Ducey sharply criticized the Biden administration for its inability to manage the nation’s ongoing border problems during the Dec.7 event. Local officials joined him to detail their ongoing efforts to stop illegal crossings

“We have a lot more drug trafficking through the communities, and that hits our schools, it hits all throughout our community,” said Nicholls, who did not appear to see the migrants. “We really appreciate the governor’s support, the National Guard … and the men and women in Border Patrol.”

About a dozen migrants were filmed crossing the bridge from Mexico into the U.S. A young boy from the group walked around the news conference and then hugged a deputy.

On Dec. 6, border agents at the Yuma Sector recorded more than 1,500 illegal crossings. The majority of apprehended migrants were from Cuba, Brazil and Venezuela.

“We need the force of the federal government to secure the border,” Governor Ducey told reporters at the event. “That’s their job. We’re asking the Biden administration to do it. As things stand right now, this crisis will not be resolved as long as Joe Biden is our president.”

Yuma is facing an escalating humanitarian and border crisis — and it’s a direct result of the Biden administration’s poor communication, lack of organization and complete disregard for border protection. 1/ pic.twitter.com/HSz7Y5zkjC

“Ducey spoke several days after the administration announced it would reimplement the Trump-era MPP, known as the ‘Remain in Mexico’ policy, which requires asylum-seekers to wait in Mexico before immigration court hearings in the U.S.,” reports National Review. “The administration had attempted to rescind the policy but was forced to restart the program by order of a federal judge.”

President Biden had initially ended the policy when he took office, having described it as inhumane.

“We also believe in following the law, and that’s exactly what we’re doing, as there was a ruling that required us moving forward with implementation,” White House Press Secretary Jen Psaki said during a Nov. 29 briefing discussing the reinstatement of “Remain in Mexico.” She added that the president still wants to ultimately repeal the policy. 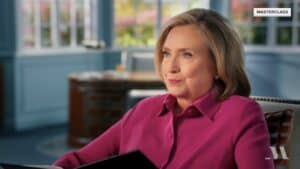