A Mexican man who has been deported from the United States twice was arrested for allegedly drawing swastikas on Union Station in Washington D.C.

The man will not face deportation under current immigration standards implemented by the Biden administration.

Geraldo Pando was arrested in January and charged with defacing private/public property and displaying certain emblems. Pando’s alleged graffiti reportedly appeared just before 1 A.M. the day after International Holocaust Remembrance Day and is being considered a possible hate crime.

The 34-year-old has a criminal history spanning over 15 years. He has been previously convicted in Colorado for an assortment of crimes — ranging from misdemeanor theft to possession of drugs.

“The criminal who defaced Union Station with antisemitic symbols, Geraldo Pando, should not have been able to commit this act of hatred,” Ohio Senator Rob Portman told the Washington Examiner. “He is a convicted felon and an unlawful migrant with a criminal history of deportations and arrests, including for assault on a first responder.”

The outlet also reported that a senior Senate aide said Pando was detained last month for vandalizing the U.S. Capitol Police headquarters. After Immigration and Customs Enforcement did not ask for him to be held until he was in federal custody, Pando was released.

“It is inexcusable that ICE did not process him and he was released back into the community to commit such a heinous crime,” Portman said in his comment. “This administration’s poor policies and reluctance to remove criminals from our streets continue to result in additional harm to our country.”

In a statement regarding the vandalism last week, D.C. Police Chief Robert J. Contee III suggested the culprit could have been a homeless person or someone with “some mental health challenges.”

Some people suggested the perpetrator was in some way motivated by President Trump’s legacy.

This is what Trump has emboldened and what the craven GOP has allowed to fester. This is not only racist/anti-semitic, it's a partisan declaration. https://t.co/lvFT4ZaQ4O

D.C. Mayor Muriel Bowser condemned the swastikas in a statement following their discovery.

“This antisemitic and hateful symbol has no place in our city, and we stand united with the members of our Jewish community against antisemitism in all its forms,” Bowser said.

Following the revelation that an illegal immigrant was behind the crime, several lawmakers have called out the Biden Administration and its Department of Homeland Security guidelines.

“A criminal, 2x deported individual who spray-painted swastikas on DC’s Union Station, a day after International Holocaust Remembrance Day, cannot be deported under Biden’s DHS guidelines,” tweeted South Carolina Congressman Ralph Norman. “What on Earth will get President Biden to wake up!”

Indiana Congressman Jim Banks wrote, “An illegal immigrant vandalized the Capitol Police HQ and was immediately released. A week later he spray-painted swastikas on Union station. The Biden admin will not deport him.”

“Welcome to Biden’s America!” he added. 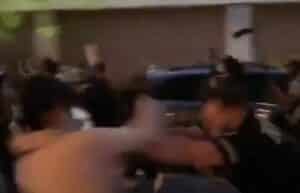