The 9-1-1 call made by the man who has been arrested for the attempted murder of Justice Brett Kavanaugh has been released to the public.

During the call, Nicholas John Roske of Simi Valley, California, admits that he needs psychiatric help.

When police arrived at the scene, Roske was found armed with a Glock 17 pistol with two magazines and ammunition, pepper spray, zip ties, a hammer, screwdriver, nail punch, crowbar, pistol light, duct tape, hiking boots, and other tools. He allegedly had planned to break into the justice’s Maryland home, kill him, then kill himself.

In the approximately 15 minute call to 9-1-1, Roske said that he had traveled from California to act on his “thoughts.”

“Are you thinking of hurting anyone, including yourself?” the emergency operator asks.

The operator asks if he is armed, which he replies that he is, but it is locked up in a suitcase.

Roske admitted that he has been “hospitalized multiple times.”

The man then explains how he had moved the weapons away from himself and was sitting on the curb. He explained that he was turning himself in because he did not believe that he could get away with it.

The operator asks if he intended to “hurt yourself and him or what was going to happen?”

“Correct” Roske replies. He admitted during the call that he was intending to harm Justice Kavanaugh.

Roske explains that he wants “to be fully compliant, so whatever they want me to do, I’ll do so,” referring to the police.

“They’re here,” Roske says, as the operator attempted to keep him on the phone with conversation. “I’m going to hang up.”

Roske did not make any political statements during the 9-1-1 call, but later told police that he was upset about the leaked opinion that would overturn Roe v. Wade and the recent school massacre in Uvalde, Texas.

The Department of Justice has charged Roske with attempting or threatening to kidnap or murder a federal judge.

The protesters were chanting, “Keep your rosaries, off my ovaries.” 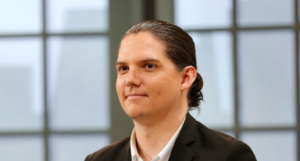