'I Am 100% Going To Win': Kari Lake Confident She Will Secure Arizona Governorship

'I Will Be The Next Governor Of Arizona. And I Think The Republican Party Should Continue With America First Policies'

On Thursday, Gubernatorial candidate Kari Lake said she was “100% going to win” her race against Democratic opponent Katie Hobbs.

“I am 100% going to win,’ she said. “I have absolute 100% confidence that I will be the next Governor of Arizona. And I think the Republican Party should continue with America First policies like we are, with common sense solutions.”

.@KariLake: "I am 100% going to win. I have absolute 100% confidence that I will be the next Governor of Arizona. And I think the Republican Party should continue with America First policies like we are, with common sense solutions."

“You see this with Kristi Noem, you see it with Governor Youngkin, you see it DeSantis in Florida. The same type of policies, America First policies we saw with President Trump, are what we are putting forth,” Lake said. “If you look at all of my policies they will help all Arizonans — it doesn’t matter if they’re Democrat or Independent or Republican.”

“They’re dragging their feet and they’re slow-rolling the results and they’re trying to delay the inevitable,” Lake said on a Thursday Newsmax appearance. “We will win this, I am 100% sure of that.”

Lake noted almost 622,000 uncounted votes remained — 384,000 of which were hand delivered to polling stations on Election Day. The Republican candidate expects the votes will lean in her favor, citing uncertainty in chain-of-custody with mail-in ballots.

“Katie Hobbs has never been in the lead, they just haven’t counted the votes, and many of the votes are Election Day votes which is where our people turn out. We are going to win and we’re gonna win handily,” Lake continued, suggesting U.S. Republican Senate candidate Blake Masters still has a chance of victory over incumbent opponent Mark Kelly. “This is outrageous the way it is. They’re trying to slow walk all of these election results to try to pour cold water on this movement. This movement is on fire. No amount of water, no amount of ice can slow it or cool it. It’s not going anywhere. We the people are awake and we’re taking our government back.”

Critics of Hobbs have suggested a conflict of interest in her current position as Arizona Secretary of State, which oversees state elections including Tuesday’s gubernatorial election with Lake. 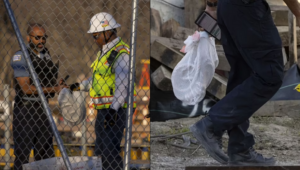