Congress has passed a bill to provide security to family members of Supreme Court justices, despite 27 Democrats voting against it.

The bill is now heading to President Joe Biden’s desk for a signature, less than a week after a man was arrested outside Justice Brett Kavanaugh’s home for attempted murder.

The Supreme Court Police Parity Act passed on Tuesday with a vote of 396-27.

The SCOTUS security bill has passed the House 396-27.

The bill will now go to President @JoeBiden for his signature. pic.twitter.com/9wUcjphmas

The only lawmakers to oppose it were Democrats, including Reps. Alexandria Ocasio-Cortez and Pramila Jayapal.

27 Democrats just voted “No” to provide security for Supreme Court Justices and their families days after an attempted assassination on Justice Kavanaugh.

The legislation amends the US Code to “grant the Supreme Court of the United States security-related authorities equivalent to the legislative and executive branches.” It additionally authorizes the “around-the-clock security protection” of “any member of the immediate family of the Chief Justice, any Associate Justice, or any officer of the Supreme Court if the Marshal determines such protection is necessary.”

The Senate had passed the bill unanimously over a month ago after a draft opinion that would overturn Roe v. Wade was leaked to Politico.

Protesters have been showing up to the homes of conservative justices after their addresses were posted online with a call to demonstrate by a group called Ruth Sent Us.

According to a report from the Washington Examiner, “It’s not clear who is in charge of Ruth Sent Us or how the group is funded. The map displayed on its website contains a link to another activist group, Vigil for Democracy. And a link at the bottom of the group’s website is for an organizing page run by Strike For Choice, yet another activist group.”

“Strike For Choice boasts endorsements from 11 activist groups, the most prominent being Code Pink, a left-wing activist group that has received funding from major Democratic groups such as the Tides Foundation,” the report added.

Protesters even showed up at the home of Justice Kavanaugh on June 8, hours after a man was arrested for an alleged assassination plot. The 26-year-old California resident was armed with a gun, knife, and pepper spray. He told law enforcement that he had traveled to Justice Kavanaugh’s Maryland home with the intent of breaking in, killing him, then killing himself.

Though these protests appear to be breaking federal law, no arrests have been made outside of the man who plotted an assassination.

Unless justices who voted to overturn the abortion legislation change their minds, abortion laws will be handed back to the states when the opinion is signed. 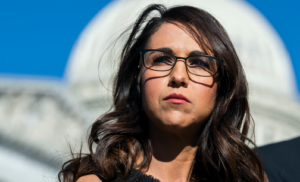