House Committee Advances Bill to 'Ensure the Right to Keep and Bear Arms is Not Unlimited,' Ban Semi-Automatic Weapons

The House Judiciary Committee has advanced a bill to ban semi-automatic weapons.

The first line of the bill explains that its aim is “to ensure that the right to keep and bear arms is not unlimited.”

Specifically, the objective is to “prohibit the sale, manufacture, transfer or import of all semi-automatic rifles that can accept a detachable magazine and have a pistol grip; a forward grip; a folding, telescoping or detachable stock; a grenade launcher; a barrel shroud or a threaded barrel,” according to a report from The Hill.

Nearly 2,000 guns that are commonly used for sport or hunting will be exempt.

“There are more guns than people in this country, more mass shootings than days in the year. This is a uniquely American problem, and assault weapons only magnify the epidemic,” the bill’s sponsor, Democrat Rep. David Cicilline, said during the committee hearing on Wednesday.

Rep. Jim Jordan, the top Republican on the committee, voted against the bill. He argued that it would “strip Americans of their right” under the Second Amendment.

“Democrats know this legislation will not reduce violent crime or reduce the likelihood of mass shootings, but they are obsessed with attacking law-abiding Americans’ Second Amendment liberties,” argued Rep. Jordan. “For over 30 years, the Democrats have been running a propaganda campaign to make people believe that ‘assault weapons’ are a specific class of firearms that no one needs.”

Rep. Jordan added that Americans would not be able to stop home intruders as effectively and said that “the legislation is dangerous, it doesn’t square with the Constitution, with the Second Amendment in any way, and it has failed in the past.”

This is the first time that a bill of this type has passed through committee in nearly twenty years. Semi-automatic weapon restrictions were passed in 1994, but expired in 2004.

The 1994 ban was led by then-Senator Joe Biden, signed by then-President Bill Clinton, and prohibited semi-automatic weapons and large-capacity magazines. Exceptions were carved out for 25 million of the weapons that Americans already owned.

It is unclear if the Democrats will have the votes to actually pass through the House, as Democrat Reps. Jared Golden and Henry Cuellar have publicly said that they will not support it.

Republican Reps. Chris Jacobs and Adam Kinzinger have said that they would be open to supporting semi-automatic weapon bans — but have not indicated if they will vote for this specific legislation.

Democrat House Minority Leader Steny Hoyer has said that he may bring the bill to the floor for a vote before the August recess. 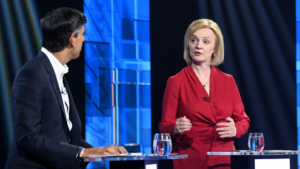