Zeldin has not conceded as of early Wednesday, saying “enjoy watching the results because what you’re about to see is this will get closer and closer and closer” when he addressed his supporters following Tuesday’s election.

Throughout his campaign, Zeldin criticized Hochul, 64, and New York Democratic policies, citing a rise in crime specifically in New York City. Hochul, on the other hand, focused her campaign on social issues including abortion.

Hochul, who previously served as New York’s Lieutenant Governor, came to office amidst Cuomo’s sexual assault scandal in August 2021. Cuomo’s brother, former CNN host Chris Cuomo, was let go from the outlet following his involvement with his brother’s scandal. Shortly after assuming the governorship, Hochul encouraged New Yorkers to be vaccinated against COVID-19, stating those who chose against vaccination “aren’t listening to God and what God wants.”

Last week, while protesting at an event for Hochul, a Zeldin supporter was reportedly choked by a man after a separate unidentified person reportedly stole her anti-Hochul sign, according to Fox News.

At a Zeldin campaign rally in upstate New York last July, the Republican candidate was attacked by a man with what appeared to be a pointed metal tool. The assailant reportedly yelled “You’re done” at the candidate. The man, who Zeldin predicted would “likely be instantly released under New York’s laws,” was identified and charged with second-degree attempted assault and released after being in police custody for six hours.

In August, Hochul said New York Republicans are “not New Yorkers” and suggested they “jump on a bus and head down to Florida.”

On the eve of Tuesday’s midterm, Hochul said Zeldin was “hyperventilating” over New York’s rising crime, echoing her debate response with her Republican challenger on Oct. 25.

“We’re halfway through the debate, and [Hochul] still hasn’t talked about locking up anyone committing any crimes,” Zeldin said.

“Anyone who commits a crime under our laws, especially with the change we made to bail, has consequences,” Hochul responded. “I don’t know why that’s so important to you.” 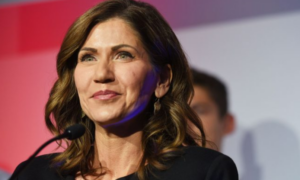