Nick Rolovich's accommodation request was denied by the university

A month log employment standoff ended with Washington State University firing its head football coach for not complying with the vaccine mandate.

Athletic director Pat Chun confirmed the head coach’s dismissal, which will be considered a for-cause separation. Chun told ESPN that Rolovich failed to meet the terms of his contract, which was set to expire in 2025.

“This is a disheartening day for our football program. Our priority has been and will continue to be the health and well-being of the young men on our team,” Chun said in a statement.

The 42-year-old coach had applied for a religious exemption to the mandate.

“The university used a blind evaluation process, meaning the two-person committee that evaluated Rolovich’s request did not have access to any identifying information while making its determination,” reports ESPN. “Based on statements from Chun, it appears Rolovich did receive the exemption. Chun said Rolovich’s ‘accommodation request’ was denied, which indicates an evaluation was made beyond the initial exemption request.”

“I don’t think this is in my hands,” Rolovich said Saturday when a reporter asked if he had received an exemption. “I’ve been settled for a long time on it, and I believe it’s going to work out the right way.”

Four assistant coaches were also let go for not getting the COVID-19 vaccine. Three of the men — Ricky Logo, Craig Stutzmann and Mark Weber — also coached with Rolovich in Hawaii. Stutzmann’s younger brother, Billy Ray, was fired from his position as an offensive assistant at the Naval Academy for refusing to get vaccinated last month.

Rolovich was popular in the state, having coached a struggling team to three consecutive wins. Many of the team’s players publicly pledged support for the coach after he was terminated on Friday.

“The most widely-circulated Instagram post by a WSU player came from standout cornerback Jaylen Watson, who shared an image of his long embrace with Rolovich after the team’s thrilling 34-31 win over Stanford — the coach’s 11th and final game at the helm of the Cougars’ program,” per the Seattle Times.

“This man changed my life in so many ways,” Watson wrote in his post. “A real stand up dude that always stands on what he believes in heart was so pure and a true role model to me and my teammates. Was always bigger than a dollar sign which is the only thing you wrap your fingers around.” 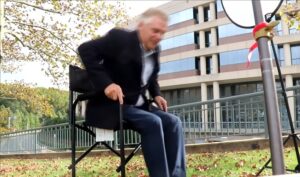 McAuliffe Walks Out of Interview, Snarls at Local Reporter for Asking Tough Questions