'Ready to get to work' tweeted the New York Congressman

Representative Hakeem Jeffries of New York won an uncontested election to take over as the leader of the House Democrats when Congress reconvenes in January.

“We’re still working through the implications of Trumpism,” Jeffries said to reporters before the party’s general meeting, per AP News. “And what it has meant, as a very destabilizing force for American democracy.”

Ready to get to work.

Pelosi announced her intuition to not seek another term in a leadership position on Nov. 17. Her decision opened the Speakership to other Democrats for the first time since 2003.

“With great confidence in our caucus, I will not seek reelection to Democratic leadership in the next Congress,” said the California Congresswoman on the chamber floor. “For me, the hour has come for a new generation to lead the Democratic Congress that I so deeply respect… And I am grateful that so many are ready and willing to shoulder this awesome responsibility.”

According to The New York Times, “Mr. Jeffries, 52, Ms. Clark, 59 and Mr. Aguilar, 43… for years have positioned themselves as an unofficial joint slate of candidates and have patiently waited their turn.”

“The leadership elections marked a sea change for the caucus, which for two decades has been led by the same trio of leaders, who effectively froze out dozens of more junior lawmakers who had been waiting to ascend,” the outlet noted.

Jefferies was first elected to Congress in 2013 and represents New York’s 8th District in Brooklyn. He previously worked as a corporate lawyer for Viacom Inc. and CBS. The New Yorker has long been viewed as one of the party’s rising stars.

“What [Barack] Obama had, he has that. I call it lightning in a bottle,” Democratic California Congressman Juan Vargas told Politico in 2018.

“I do think he’s somebody that could, with a few breaks, become our speaker and also our president,” Vargas added. “He has that talent.”

Jefferies is “a champion of criminal justice reform, having worked on legislation aimed at correcting sentencing disparities for crack versus powder cocaine and introducing the Eric Garner Excessive Use of Force Prevention in 2015, then later again in 2021 as part of the George Floyd Justice in Policing Act,” reports USA Today.

The Congressman has advocated for increasing gun control regulations, lowing the cost of childcare and prescription drugs, and protecting pro-abortion policies. He is a member of the House Progressive Caucus.

Both Majority Leader Steny Hoyer and House Majority Whip Jim Clyburn endorsed Jefferies after announcing their plans to step down from party leadership.

He was selected by Pelosi to serve as House manager during President Donald Trump’s impeachment in January of 2020.

“It is my hope that we can find common ground where possible with our Republican colleagues in order to deliver results for the American people. At the same time, the opposing party appears to have no plan to accomplish anything meaningful,” Jefferies said in a letter to House Democrats announcing his candidacy as their next leader on Nov. 18.

“If the Republican Conference continues to major in demagoguery and minor in disinformation, their bankruptcy of ideas must be aggressively exposed on an ongoing basis,” he added. “I have done that work and, if necessary, will continue to do that work should I be given the opportunity.” 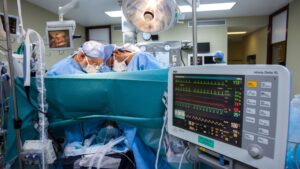