The band Guns N’ Roses has filed a lawsuit against a Texas gun shop over its name.

The online shop, Texas Guns and Roses, is operated by Jersey Village Florist and sells both weapons and flowers.

According to a report from People Magazine, the band is demanding that the shop change its name and pay damages.

The lawsuit claims that the shop has used the name “for the purpose of confusing consumers into believing that it was connected or associated with, or licensed by, GNR.”

“Guns N’ Roses also claims that the store — which is operated by Jersey Village Florist — sells roses along with firearms, in an effort to justify the ‘wholesale appropriation’ of the Guns N’ Roses trademark,” People reports.

The band learned about the shop in 2019 and sent a cease and desist letter the following year.

The lawyer representing Guns N’ Roses argued that the shop ignored the cease and desist letter and continued to “intentionally trade on GNR’s goodwill, prestige and fame without GNR’s approval, license or consent.”

“This is particularly damaging to GNR given the nature of defendant’s business. GNR, quite reasonably, does not want to be associated with defendant, a firearms and weapons retailer,” the complaint states. “Furthermore, the defendant espouses political views related to the regulation and control of firearms and weapons on the website that may be polarizing to many U.S. consumers.”

David L. Clark, a Houston attorney representing Jersey Village Florist, told NBC News that he has not yet seen the complaint, but that GNR’s lawyers have filed in federal court because “their attempts to persuade the Trademark Trial and Appeal Board to cancel texasgunsandroses.com’s registration is likely to fail.”

“There’s never been any confusion (between the band and the website) and they have no evidence of confusion,” Clark said.

“This is an attempt to run up costs and burn us out,” he said. “Our client sells metal safes for guns and flowers, and have a one-stop website and absolutely no one is confused. Nobody thinks we’re the band or there is some affiliation. We will be fighting back.” 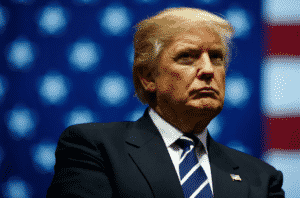 'DISINFORMATION AND LIES': Trump Responds To Critics Suggesting He Proposed 'Terminating' The Constitution