Grindr Fined Over $7 Million in Norway For Privacy Breach

The Norwegian Data Protection Authority, the nation’s data privacy regulator, issued the fine. While Norway is not a part of the E.U., the country often enforces its policies.

The agency said users “were forced to accept the privacy policy in its entirety to use the app.”

“The authority said it reduced the initial fine after receiving information about the size and financial situation of Grindr, as well as efforts to comply with privacy rules,” reports UPI. “The investigation focused on how Grindr asked for consent after the rules came into effect last year.”

The agency also noted that the fine is about 32% of the maximum possible amount, which could be “€20 million or up to 4% of an entity’s total global turnover in the preceding year, whichever is higher,” per TechCrunch.

Originally, the agency had planned to fine the company $100 million Norwegian crowns but reduced the amount after Grindr made efforts “to remedy the deficiencies in their previous consent-management platform.”

In a statement, the DPA said the fine was “proportionate both to the severity of the infringement and to Grindr’s financial situation.”

Grindr, which is based in California, said “the agency’s findings related to consent policies from years ago, not its current practices, and that it is considering its next steps, including an appeal.”

Shane Wiley, Grindr’s Chief Privacy Officer, denied the allegation, arguing that the agency “relies on a series of flawed findings, introduces many untested legal perspectives, and the proposed fine is therefore still entirely out of proportion with those flawed findings.” 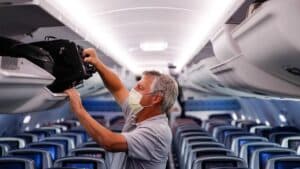 Airline CEO's Raise Questions About The Need of Masks on Planes