Instead of “mom,” Grimes’ one-year-old son calls her by her legal first name.

The Canadian singer, born Claire Elise Boucher, told Vogue that her son X Æ A-Xii can sense her aversion to the term.

“Being a mother feels weird to say. For some reason, I don’t identify with that word. Which is also really weird, because X, he says Claire, but he doesn’t say Mama,” Grimes said. “Maybe he can sense my distaste for the word ‘mother.’ Which I don’t even know why I have a distaste for it … I just can’t identify with it, weirdly.”

Grimes shares her son, who was born in May of 2020, with Tesla founder Elon Musk. His unusual name immediately caught the internet’s attention.

•X, the unknown variable ⚔️
•Æ, my elven spelling of Ai (love &/or Artificial intelligence)
•A-12 = precursor to SR-17 (our favorite aircraft). No weapons, no defenses, just speed. Great in battle, but non-violent 🤍
+
(A=Archangel, my favorite song)
(⚔️🐁 metal rat)

The couple did have to change the end of the child’s name from “12” to “Xii” to meet California’s standards. State law does not allow for numbers in names so the couple switched to Roman numerals instead.

The tech billionaire told Joe Rogan during an interview on his podcast that they pronounce the name “X Ash A Twelve.”

“My partner is the one who mostly came up with the name,” Musk said. “Yeah, she is great at names.”

Grimes is not the only modern parent to prefer that her child uses her first name rather than ‘mom,’ ‘mommy’ or ‘mama.’

Babble contributor wrote that her 10-year-old and 13-year-old switched to calling her by her initials or her first name.

“I don’t feel that being called by my first name diminishes the fact that I am my children’s mother at all. Despite what some people may suspect, to me it does not imply a lesser love, alienation, or a lack of respect,” she wrote in a 2012 piece explaining her experience.

“When my kids call me by my first name, they acknowledge that I am a person with a life that extends beyond caring for their needs. They recognize how I relate to the world outside of my role as a mother, and I just can’t see that as anything but a good thing.”

In 2019, parenting publication Romper put together a list of alternatives to the terms ‘mom’ and ‘dad’ for LGBTQ parents and “parents who don’t identify with either.”

“I think having a baby was like a big rebirth for me, like artistically,” Grimes told Vogue as she prepared for the Met Gala.

Elon Musk and Grimes made their first public appearance as a couple at the 2018 Met Gala. 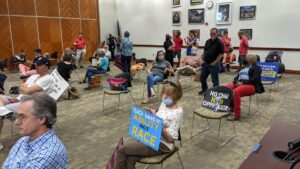