Greece Requests EU Funding For Extension of its Border Wall

Greece will ask the European Union to fund its plan to extend the border wall separating the Mediterranean nation from Turkey.

The country also wants to strengthen a surveillance network it employs to stop migrants from illegally crossing the border.

In a statement to a parliamentary committee, public order minister Takis Theodorikakos said the EU border could become a method that neighboring countries use to pressure Greece into certain political actions. He used the recent border crisis between Poland and Belarus as an example.

“We have every reason to expect that these kinds of threats will continue,” he said at the Dec. 17 hearing, which was made public this week.

Greece is led by the center-right government that has prioritized strengthening immigration policies. The government recently finished a 16-mile extension of the steel border wall. It now totals 24 miles in length and has surveillance towers with long-range cameras and sensors that will send data to a processing center scheduled to open in 2022.

“The artificial intelligence-driven system is aimed at tracking multiple incidents using data from surveillance sensors and flagging those considered the most serious to border guard officers,” reports AP News. “So far, the wall and detection network helped prevent more than 143,000 illegal crossing attempts on the Greek-Turkish land border, he said, over eight months this year through October — a 45% increase from a year earlier.”

“This automated system gives us many operational advantages and helps us monitor the entire border region,” Theodorikakos said.

The government has said that it will not admit migrants into Europe and will turn them away at the borders.

Human rights watchdogs have accused the nation of allowing migrants to suffer by failing to protect their rights.

Greek leadership has counter-argued that the more rigid restrictions prevent other nations from exploiting migrants for their own gain. The government has also said the rules keep the number of arrivals at a manageable level.

Greece plans to request the funding in 2022. 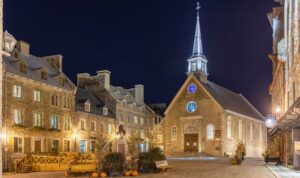 Quebec to Limit Gathering in Homes to Six People