New Poll: 60 percent of all voters believe the government should do more to address climate change

Governors in eight states have been the first to formally issue proclamations recognizing the sixth National Clean Energy Week (NCEW).

NCEW began in 2017 as a bipartisan forum to connect clean energy leaders around the U.S. and last year more than half of states participated.

“As the cost of living continues to rise, it is reassuring to see leaders from both sides of the aisle and from across the country take a hard look at the solutions clean energy technologies provide to address America’s most pressing environmental, economic and national security needs,” said Heather Reams, chair of NCEW and president of Citizens for Responsible Energy Solutions (CRES). “We look forward to taking a deep dive into these critical policy areas during the sixth annual NCEW and Policy Makers Symposium.”

There are often strong political divides over the issue of climate change, with 59 percent of Democrats considering it a top concern and only 10 percent of Republicans saying the same, according to Pew Research Center.

“Voters want realistic climate solutions and support energy and climate policies authored and championed by many Republicans in Congress,” Reams said. “Alternatively, our data show Republican and independent voters oppose heavy-handed policies typically backed by Democrats such as higher fossil fuel taxes and the elimination of natural gas from our energy mix.”

Neil Newhouse, co-founder of Public Opinion Strategies, who conducted the poll, said 60 percent of voters, including 37 percent of Republicans and 66 percent of independents, believe the government should do more to address climate change.

“The data clearly shows that voters are more likely to support a candidate who endorses ‘commonsense’ policies addressing climate change and clean energy; that’s especially the case for key swing 2022 constituencies,” he said.

At least 80 percent of all voters favor:

“Natural gas stood out as one of the key solutions voters believe can help the U.S. transition to a cleaner economy,” Reams continued. “Most Americans say natural gas is affordable, plentiful, reliable, clean, and will be an important part of building an energy-independent, all-of-the-above energy mix for decades to come.”

She added that more than half of Americans oppose banning natural gas, noting that voters are aware that natural gas bans result in energy shortages and higher prices. 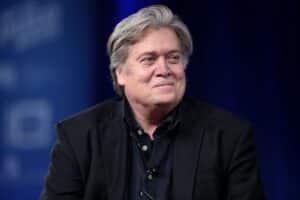 Steve Bannon Responds to New York Indictment, 'They Are Coming After All of Us'