Earlier in the day, Trump had posted about the Republican governor on Truth Social, writing “Young Kin (now that’s an interesting take. Sounds Chinese, doesn’t it?) in Virginia couldn’t have won without me.”

For several days the former president has been striking out at possible candidates that may challenge him for the 2024 Republican nomination, including Gov. Ron DeSantis and Youngkin.

“First of all, I didn’t see it,” said Gov. Youngkin. “Listen, you all know me, I do not call people names. I really work hard to bring people together, and that’s what we’re working on.”

The reporter responded by saying, “well he’s kind of calling you a name.”

Asked about former President Trump saying Gov. Youngkin’s name “sounds Chinese” and that he couldn’t have won without him, @GovernorVA says he didn’t see the comments. He said he does not call people names and he is focused on bringing people together @8NEWS pic.twitter.com/PlZ9aFXTWv

Youngkin was also asked about Lt. Gov. Winsome Sears saying that it is time for the party to move on from Trump.

“A house divided against itself cannot stand. And indeed that’s where we are today,” Sears added.

Sears was previously a staunch advocate of Trump.

For his part, Youngkin declined to express his opinion on the matter — instead saying that he is focused on “bringing people together.”

Asked about @WinsomeSears saying it’s time for the GOP to “move on” from former President Trump, @GovernorVA says he is focused on bringing people together and he had nothing to do with those comments @8NEWS pic.twitter.com/6cWnjas89Z

“I haven’t made any comments on that,” said Youngkin. “Right now what I am focused on is bringing everybody together, post the election, and getting everybody moving.” 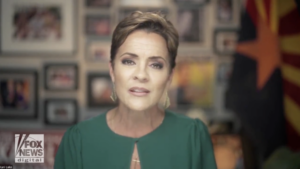 'I Am 100% Going To Win': Kari Lake Confident She Will Secure Arizona Governorship