Publicly traded Internet domain registrar and web hosting company GoDaddy has announced that they are terminating services for a Texas pro-life whistleblower website.

The Big Tech giant said in a statement on Friday that Texas Right to Life, a pro-life group, had 24 hours to find a new hosting company before they were shut down for allegedly violating their terms of service.

“We have informed prolifewhistleblower.com they have 24 hours to move to another provider for violating our terms of service,” a GoDaddy spokesperson told The New York Times,

In Texas, a new controversial law has banned abortions after an ultrasound can detect a fetal heartbeat, which can occur as early as six weeks into pregnancy. There is an exemption only for cases of medical emergencies.

However, instead of the government enforcing the law, it will be left to private citizens to sue abortion providers or anyone who helps a woman obtain the procedure after the fetal heartbeat has been detected. The citizen will not have to have a connection to the person who had the abortion or the provider in order to have standing to sue. Additionally, the woman cannot be held liable for the abortion, only those who aided and abetted her.

For this reason, Texas Right to Life launched prolifewhistleblower.com for people to report violations of the Heartbeat Act.

“Pro-abortion advocates tried for over a week to overwhelm the website with traffic and fake tips. When they failed, keyboard warriors harassed GoDaddy to take down our site,” Texas Right to Life said in a statement. “GoDaddy emailed the Texas Right to Life IT team Thursday evening alleging we violated the terms of service. They neglected to specify how.”

GoDaddy claimed that the website was in violation of multiple terms of service, including section 5.2, which reads:

You will not collect or harvest (or permit anyone else to collect or harvest) any User Content (as defined below) or any non-public or personally identifiable information about another User or any other person or entity without their express prior written consent.

Texas Right to Life Director of Media and Communication Kimberlyn Schwartz has vowed that they will keep the website up, even after GoDaddy terminates services.

“We will not be silenced. If anti-Lifers want to take our website down, we’ll put it back up. No one can keep us from telling the truth. No one can stop us from saving lives. We are not afraid of the mob. Anti-Life activists hate us because we’re winning. Hundreds of babies are being saved from abortion right now because of Texas Right to Life, and these attacks don’t change that.”

Texas Right to Life’s statement concluded that “GoDaddy removed the site around 8:00 p.m. Friday. Our IT team is already in process of transferring assets to another provider, and we’ll have the site restored within 24-48 hours.”

The website was still down and forwarding to their main site as of Monday morning. 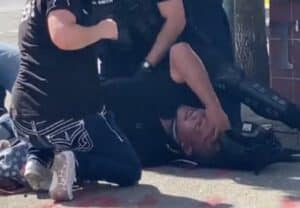