The girlfriend of Anthony Huber, who was fatally shot by Kyle Rittenhouse during the riots in Kenosha, told Timcast what she believes “justice” would look like.

Hannah Gittings, 25, said that “justice” for her, would look like Rittenhouse “growing up, finding love and family as beautiful as Anthony and I had. Then him realizing exactly what was taken from us and feeling that fully.”

During an stunning interview with the New York Post on Thursday, Gittings admitted that she has sympathy for Rittenhouse, despite her belief that he was running around the town trying to be “king of the world.”

“I do have a lot of sympathy for this kid because he is just a kid to me so it was just like a really dumbass kid who unfortunately became the figurehead for this,” she said.

“Kenosha also needs to be held responsible for allowing this militia to show up and do exactly what they came here to do,” Gittings asserted.

Huber encountered Rittenhouse immediately after the shooting of Joseph Rosenbaum. According to Gittings, they believed the 17-year-old was an active shooter — so her boyfriend jumped in to try to stop him.

“One of them goes out, taking advantage of a vulnerable situation so that he can live out his fantasy of being king of the world and one of them out there doing absolutely nothing, nothing f–king wrong and being presented with yes, an active shooter situation and leaping into action without a second thought of his own safety,” Gittings said.

“The outcome of this trial, it could go literally any way in the world, good or bad for us and it still would not change any of this for us,” she said.

Gittings also said that she hoped there would be some semblance of justice for her boyfriend, but did not specify what that was.

Timcast reached out to Gittings to ask what “justice” would look like for her. 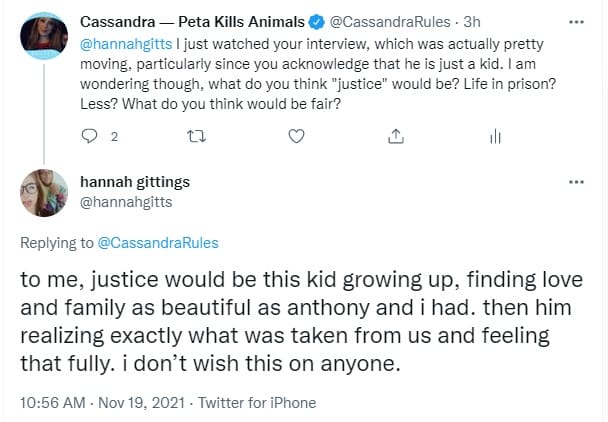 “To me, justice would be this kid growing up, finding love and family as beautiful as Anthony and I had. Then him realizing exactly what was taken from us and feeling that fully. I don’t wish this on anyone,” Gittings replied.

The jury is currently in the midst of deliberations, which began on Monday.

He faces a life sentence if convicted of first-degree intentional homicide.

Rittenhouse maintains that he had been acting in self defense.