The German team will compete in sleeveless, leg-covering unitards during the 2021 Tokyo Olympics

German gymnasts competing at the Olympics will forgo traditional leotards in favor of leg-coving unitards.

Several team members posted photos of their new uniform at a practice on Thursday with 21-year-old Pauline Schaefer asking in her caption “How do you like our new outfit?”

The team first wore the unitards at the European Artistic Gymnastics Championships.

The gymnasts opted for the more conservative outfit as a stand against the ‘sexualization in gymnastics, especially in the wake of the sexual abuse scandals that have rocked the industry, the German gymnastics federation told BBC.

Gymnastics was rocked in recent years by the revelations that team doctor Larry Nassar had sexually abused hundreds of female athletes for over a decade.

“Olympians, national team members, the other 500 plus survivors of Nassar and predatory coaches are still waiting for USA Gymnastics to be held accountable. Instead, critics charge, the national governing body, dominated for years by marketing personnel and attorneys, still clings to a mindset that prioritizes medals and money (and concerns about legal liability) over athlete safety,” according to the East Bay Times.

When asked during an interview with public broadcaster ZDF about her decision to wear a unitard, German Gymnast Sarah Voss said “We women all want to feel good in our skin.”

“In the sport of gymnastics, it gets harder and harder as you grow out of your child’s body. As a little girl, I didn’t see the tight gym outfits as such a big deal. But when puberty began, when my period came, I began feeling increasingly uncomfortable,” she said.

Olympic teammate Elisabeth Seitz said everyone trained in full-body outfits and then at one point asked themselves why they should not do the same in competition, per the BBC.

Women’s uniforms have been hotly debated in recent years. Yahoo!Sports points out “the Norwegian women’s handball team made headlines by refusing to wear the bikini bottoms mandated by the European Handball Federation. Conversely, a Paralympic athlete called out an official at the English championships for complaining that her shorts were too revealing.”

At the London Olympics in 2012, the Amateur International Boxing Association’s suggestion that female competitors wear skirts to distinguish them from men was denounced as a “disgrace” by Irish world champion Katie Taylor.

That was the same year “several Muslim nations sent their first female athletes to the Olympics in modest uniforms,” said Refinery29. Several sports, including weightlifting, judo, and track, have all had to navigate how modest uniforms and headscarves impact safety and integrity concerns. 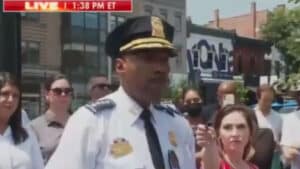 DC’s Top Cop Rips Local Leaders for ‘Coddling Violent Criminals’, Allowing ‘Them Back Out’ After Arrests