This Marks the Second Election In A Row Where Control of the U.S. Senate May Be Determined By a Georgia Runoff

Georgia’s Senate race will head to a runoff between Sen. Raphael Warnock and former NFL star Herschel Walker after neither candidate received more than 50 percent of the vote.

The day after the midterm elections, with 99 percent of the expected vote reporting, Warnock leads Walker by 17,491 votes, according to ABC News.

Both candidates are each sitting with 49 percent of the vote, but state law requires one candidate to receive at least 50 percent to avoid a runoff.

“While county officials are still doing the detailed work on counting the votes, we feel it is safe to say there will be a runoff for the US Senate here in Georgia slated for December 6,” Gabriel Sterling, chief operating officer for the Georgia Secretary of State’s office, wrote on Twitter.

“Right now we have less than 20,000 total votes still out to be counted. That’s not enough to change the race. So this is headed for a runoff,” Georgia Secretary of State Brad Raffensperger said on Nov. 9.

This marks the second election in a row where a runoff election in Georgia could determine the balance of power in the U.S. Senate.

In 2020, Warnock went up against Republican incumbent Sen. Kelly Loeffler in a contest that ended in a January 2021 runoff, which Warnock won.

Warnock and Walker ran in one of the most watched races in the country. Though the pair ended the general election in a tie, Warnock’s campaign spent $135.8 million, while Walker’s campaign only spent $32.4 million.

On Nov. 9, Warnock told a crowd at an event, “Keep the faith and keep looking up. Whether it’s later tonight or tomorrow, or four weeks from now, we will hear from the people of Georgia.” 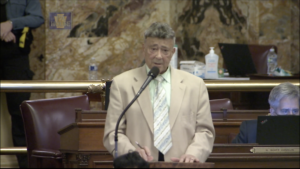 Pennsylvania Reelects Candidate Who Passed Away In October