A monument erected for future generations was significantly damaged in Georgia in an apparent bombing.

The Georgia Bureau of Investigation released surveillance footage of the stone structure being hit just after 4 AM on July 6 and a car leaving the scenes moments later. The video was made public just after 6 PM.

The stone structure was under 24-hour surveillance. The GBI has not yet determined a suspect or motive for the crime.

The monument is located in Elberton and has been referred to as the American Stone Henge. Each of the 19-foot granite rectangular stones bears part of a 10-part message inscribed in “espousing the conservation of mankind and future generations in 12 languages,” per WYFF 4.

There were also inscriptions in Babylonian cuneiform, Classical Greek, Sanskrit, and Egyptian Hieroglyphics.

“The Guidestones also serve as an astronomical calendar, and every day at noon the sun shines through a 7/8-inch hole in the center stone and illuminates the day’s date on an engraving,” per 365 Atlanta Traveler.

One of the stones was destroyed during the explosion while the others remained intact.

“The capstone piece has been damaged and I’m sure the other three wings, and the center support probably have damage to them as well,” Christopher Kubas, Executive Vice President of the Elberton Granite Association which maintains the Guidestones, told the station. “Each one of those wings is 16 feet 4 inches tall. It’s 1.7 inches thick and it’s 6’6 wide. They weigh about 42,000 pounds each.”

The structure was demolished hours after the incident for safety reasons according to Georgia officials.

Update: The remainder of the Georgia Guidestones are currently being demolished following the mysterious explosion. Perpetrator(s) still unidentified. pic.twitter.com/umh3Ih83Oa

The structure was unveiled in the 1980s on a 5-acre plot of land near the border of Georgia and South Carolina. The location is the highest point in Elberton county and was purchased for $5,000 in 1979 by a man who called himself  R.C. Christian.

Christian “approached the Elberton Granite Finishing Co. with plans for four vertical granite stones standing nearly 20 feet tall, each to be inscribed with the same 10 precepts for humanity, carved in eight languages,” reported the Athens Banner-Herald in 2015. “It has been suggested the inscriptions describe the basic concepts required to rebuild civilization following a nuclear Doomsday. … Locals tell stories of witchcraft taking place at the stones and relate instances of teenagers in black garb carrying buckets of chicken blood at the site.”

The monument has had a variety of supporters, including musician Yoko Ono who said the message was a “stirring call to rational thinking.”

When Timcast visited the location in mid-March, a groundskeeper spraying the Guidestones with granite sealer said the area was regularly defaced.

“I pressure washed off pentagrams and devil signs last week,” the man, who did not offer permission to be quoted by name, told Timcast. “It happen[s] every day.”

He went on to explain there were plans to install “a better camera and a floodlight.”

“[Vandals] come out here and burn candles. They do a thing with the cooking oil… they pour oil all over the stones and burn it. It’s some kind of a séance thing and all that crap then they get the dang chicken bones out… I’ve seen all kinds of crap out here. We had a man come out here one day––he had a damn live chicken with him and he wanted to climb up to the top and cut that chicken’s head off and let the blood run down the rocks.”

When asked if this was a fairly normal occurrence in the area, the man nodded.

“I had another man out here wiping his blood all over the rocks,” he said.

This is a developing story and will be updated accordingly as more information is obtained. 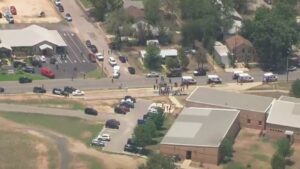