Democratic California Governor Gavin Newsom challenged Republican Florida Governor Ron DeSantis to a debate before the November election in a tweet on Friday.

Newsom challenged DeSantis to debate after former longtime CBS anchor Dan Rather originally proposed the idea in a tweet late last August. Rather suggested the debate to current CNN President Chris Licht as “prime time,” saying it would garner “big ratings.” The longtime anchor questioned who between the two governors would be courageous enough to participate in the proposed debate.

“Here’s an idea for Chris Licht, the new head of @CNN. Set up a debate — one-on-one — between @GavinNewsom and @RonDeSantisFL. Two governors of big states, potential presidential candidates. Prime time. Ratings I bet would be huge. Who would have the courage to show up?” Rather posted on Twitter.

Neither Governor appeared to express interest in the proposed debate until Newsom retweeted Rather’s message on Friday.

“Hey @GovRonDeSantis, clearly you’re struggling, distracted, and busy playing politics with people’s lives. Since you have only one overriding need — attention –let’s take this up & debate. I’ll bring my hair gel. You bring your hairspray. Name the time before Election Day. @CNN,” said the California Governor in a Tuesday tweet.

Hey @GovRonDeSantis, clearly you're struggling, distracted, and busy playing politics with people’s lives. Since you have only one overriding need — attention –let's take this up & debate. I’ll bring my hair gel. You bring your hairspray. Name the time before Election Day. @CNN https://t.co/vTJHQxfArW

Governor DeSantis has not directly responded to the challenge as of Friday night though his former press secretary and current rapid response director Christina Pushaw replied to the California Governor’s challenge.

“Thirst post all you want. You’re not getting those U-Hauls back 😎” Pushaw said in reference to the state’s net negative migration as Californians fled in response to the COVID-19 pandemic.

Shortly after tweeting her response Pushaw also tweeted out,”@GavinNewsom is so obsessed with Florida and debating @GovRonDeSantis What I don’t understand is why. Governor DeSantis is focused on governing our state. Gov. Newsom should focus on governing HIS state instead of campaigning against Joe Biden in a shadow primary.”

Newsom has been speculated as a 2024 Democratic Presidential nominee most notably after a July trip to Washington D.C. to accept an award “in recognition of CA’s transformative improvements to education,” according to a press release from the California Governor’s Office.

According to a July poll conducted by Morning Consult and Politico, 51% of Democratic voters said President Biden should run for reelection in 2024 while another 40% said he shouldn’t.

Newsom previously ran an advertisement on July 4 this year which the California Governor reportedly said is not a Presidential campaign ad for 2024 or future elections, CNN reported, though it is an advertisement for the Governor’s 2022 reelection campaign.

The ad, which reportedly cost $105,000 and was provided early to CNN according to the outlet, features Newsom addressing viewers as images of DeSantis and headlines about the Florida Governor appear on screen.

“It’s Independence Day – so let’s talk about what’s going on in America,” says Newsom. “Freedom is under attack in your state,” the Governor told Floridians. Newsom accused DeSantis of book banning as well as putting restrictions on speech and voting access. “I urge all of you living in Florida to join in the fight, or join us in California where we still believe in freedom. Freedom of speech, freedom to choose, freedom from hate, and the freedom to love. Don’t let them take your freedom.” 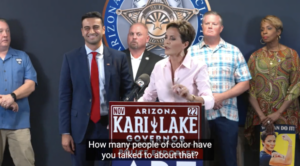 'It Doesn't Matter What Your Skin Color Is': Kari Lake Says All Arizonans Want Safety, Security