'It Doesn't Matter What Your Skin Color Is': Kari Lake Says All Arizonans Want Safety, Security

'These Brave Men And Women, Do They Look Like Racists To You?' Said Arizona AG Candidate Abe Hamadeh replies to reporter

Arizona Republican Gubernatorial candidate Kari Lake took one reporter to task over the claim that people of color were targeted by police during a joint press conference on Thursday.

Candidates Lake and Republican nominee for Arizona’s Attorney General Abe Hamadeh campaigned at the Phoenix Law Enforcement Association. A reporter questioned Lake, if elected Governor, how she planned on improving the perception that law enforcement targets people of color. When Lake asked for the question to be repeated, the reporter replied, “A lot of people of color feel like they are targeted.”

“How many people of color have you talked to about that?” Lake responded.

The two had a brief back and forth before Lake said, “I talk to people of color. I talk to all Arizonans. They’re all concerned about the crime. Just because their skin color isn’t the same color as yours doesn’t mean you want your kids to be walking down the street in an unsafe neighborhood. Every Arizonan wants safety and security in their neighborhoods.”

Lake said claims that law enforcement targets people of color was a lie perpetuated by left-wing media — an assertion that earned applause from law enforcement members standing behind her.

BIG MISTAKE: Reporter claims People of Color are "TARGETED" by Police@KariLake: “Every Arizonan wants safety & security in their neighborhood. It doesn’t matter what your skin color is.”@AbrahamHamadeh: "Do these these brave Men & Women look like racists to you?"

“You don’t believe that’s an opinion a lot of people of color have?” another reporter asked Lake.

“Go into a neighborhood and ask the people in neighborhoods that are minority neighborhoods, do you want fewer police? Do you want to defund the police?” said Lake. “They will look at you like you are the craziest person on the planet. Nobody wants that.”

Hamadeh took the podium after Lake’s response and brought attention to the diverse members of law enforcement behind the candidates saying, “Look around us. These brave men and women, do they look like racists to you?”

“No,” Hamadeh continued, “They’re members of our community. It’s time we treat them with respect.”

Lake continued after Hamadeh’s statement, highlighting law enforcement’s use of body cameras and legacy media’s use of trimmed down footage to push the aforementioned narrative. 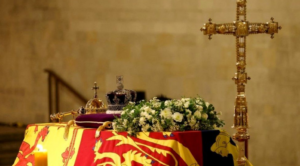