The annual cost of gas for American families has increased $2,200

As gas prices across the United States continue to surge to record levels, residents in 10 states and Washington, D.C. are now seeing the cost for regular gas exceed $5 per gallon.

In California, Hawaii, Nevada, Oregon, Illinois, Washington, Alaska, Arizona, Michigan, Indiana, and the District of Columbia, regular gas prices range from $5.04 – $6.34 per gallon, according to AAA.

Nearly 10 more states, including Idaho, Pennsylvania, Maine, New Jersey, and Vermont, have per gallon prices over $4.89.

For premium gasoline, all but four states have prices exceeding $5. For diesel, the lowest price nationwide is $5.128 per gallon.

The highest priced gas station in the country is a Chevron station in Mendocino, a small coastal community in northern California, which is charging $9.60 per gallon for regular.

In the midst of persistent, historically high prices for fuel, allegations of price gouging have circulated. The U.S. House of Representatives passed a bill aimed at curbing alleged gasoline price gouging. However, much of the reason for the price increases is related to fixed costs and market pressure.

Judy Schlafer, the station’s owner, told SFGate her last delivery of 8,880 gallons of gas cost roughly $50,000 and needed to be paid for within 10 days. She said that if she didn’t charge $9.60 per gallon, she would be out of business.

California has the highest fuel tax in the nation – 51 cents per gallon – and is set to raise that tax rate July 1.

“I’m going to be lucky if I make the year with all the fees, the regulation, the payroll fees,” she said. “If it continues the way it is, Mendocino won’t have a gas station next year.”

Summer months are the busiest for driving and families across the nation are now spending what amounts to $5,000 per year for gas, an increase from $2,800 a year ago.

Republicans have pressured the Biden administration to pursue Trump-era oil and energy policies to lower fuel prices. President Biden, who is under pressure from the climate lobby and just weeks ago urged Americans to just accept high gas prices as part of “an incredible transition” away from fossil fuels, has so far refused. 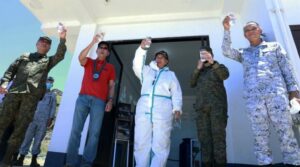