Fuentes told Jones he was unsure if he was allowed to attend Trump and Ye’s pre-scheduled dinner though was granted clearance after security “checked” ID and information. The dinner began relatively pleasant as Trump discussed black voters in regards to “opportunity zones,” according to Fuentes. Ye had mistakenly forwarded a text message to Nick Gravante, a mutual lawyer between the rapper and Trump, with details regarding the group’s meeting. The meeting reportedly turned sour after the former President received a phone call from someone suggesting the dinner was a “setup.”

“Ye had accidentally sent a text message to a lawyer that both Trump and Ye share, and forwarded him some intel that Karen [Giorno] gave to us about how we were going to have the Trump meeting, how to read his body language and the kinds of things that maybe we should avoid, or things we might want to say,” said Fuentes. “And so before the dinner, Ye actually forwarded that to a lawyer, who then, in the middle of the dinner, apparently called Trump to say hey, Karen Giorno is involved, this is a setup. You guys are being set up right now.”

“It was really just based on a misunderstanding,” Fuentes said, clarifying Gravante’s claim.

“We pulled up in the car and Ye said ‘hey, I’ll forward you these notes,’ so he forwarded it to me and I said, ‘hey, I didn’t get the text,’ and we kind of brushed it off, and we found out later he meant to send it to ‘Nicholas Fuentes’, he sent it to ‘Nicholas Gravante’ on accident,” Fuentes continued.

Ye reportedly played some of his music for Trump as Fuentes said the dinner remained “pleasant” and “friendly.”

“Then in the middle of this dinner, Trump gets this call, because Nick Gravante apparently sent the text to one of Trump’s guys or somebody, somebody called Trump and said Karen is giving Ye intel, because Karen worked for Trump, she ran the state of Florida during the Republican primary in 2016, and he got the heads up they thought it was some big ambush.”

The former President reportedly became irate after Ye, who has announced his campaign for the 2024 Presidential election, proposed Trump could serve as his running mate.

Throughout West and Fuentes’ appearance on Jones’ show, the rapper made a number of antisemitic comments and said Hitler was a “cool leader.” West further referred to his mother’s death and Michael Jordan’s father’s murder as “Zionist sacrifices.” At one point, Ye said, “There’s a lot of things that I love about Hitler. A lot of things.”

Jones appeared to be uncomfortable throughout Ye’s diatribe, though reiterated that while he disagrees with the rapper he believes he should be allowed to express his opinions.

Ye recently lost partnerships with Adidas, Gap and Balenciaga following a tweet in which the rapper said he would go “death con 3″on Jews in October. 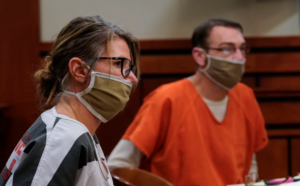