From Shakespeare To Streaming: A Turn Towards The Ephemeral

Will a handful of Woke Twitter personalities permanently alter the film industry and spoil the whole cultural barrel?

This file is licensed under the Creative Commons Attribution 4.0 International license. The image has been cropped and resized.

Streaming series and services are all the rage in the 2020s. According to 2021 data from the Leichtman Research Group, 78 percent of American households subscribe to Netflix, Amazon Prime, or Hulu. As a result, a handful of companies can determine what viewers are able to watch on streaming-video-on-demand (SVOD) services.

With the concentration of power in a handful of media corporations, it is not surprising that the various woke-social-media-driven moral panics have clamored for the alteration or complete removal of films and episodes. For instance, episodes of popular sitcoms like NBC hits Scrubs and 30 Rock were deleted from streaming services for featuring ironic uses of blackface (that were intended to illustrate the inappropriateness of the century-old practice in which the blackface wearer is the butt of the joke). Home Alone 2 re-airings in Canada have removed the cameo of future President Donald Trump (then a personification of New York City opulence). Even The Simpsons’ third season premiere has been erased from streaming because features Michael Jackson as a guest star. Another example of this effect can be found in the stealth edits made by outlets like the New York Times and the Washington Post.

But is this a new challenge borne of the digital age? Sadly, no. Today, William Shakespeare’s King Lear, first performed in 1606, is regularly performed in its original version. However, between 1681 and 1838, the version of King Lear that was performed to popular reception was an adaptation called The History of King Lear by Nahum Tate. Tate’s version changed the tragic conclusion of the original to a happy ending in which King Lear is restored to the throne.

For over a century, a royal official known as the Lord Chamberlain of the Household had the ultimate authority to censor plays. The Licensing Act of 1737 created a position called the Examiner of Plays, who worked with the Lord Chamberlain to censor all plays between 1737 and 1843. In 1810, out of respect for King George’s madness, performing King Lear itself was officially banned. The ban lasted until 1820. It was not until 1838 in which a performance of the original Shakespeare version attained some success. The Theatres Act 1843 restricted the power of the Lord Chamberlain, just five years after the 1838 staging of Shakespeare’s King Lear. But it would take the 1968 Theatres Act to completely undo the 1737 law, leading to greater artistic freedom in the British theatrical world.

Today, streaming services have stepped up to fill the role pioneered by an unelected, self-appointed body in eighteenth-century Britain that lorded over playwrights and audiences. In both cases, the lack of accountability reigns supreme. British subjects had no recourse to challenge the royal authorities and neither do today’s consumers short of expensive, time-consuming activist investing.

The actions of the royals ultimately had consequences in accordance with the immutable, universal law of cause of effect. More censorship meant fewer new plays, which led to more revivals of older works. Satirical playwrights became prose authors as witticisms went from the stage to the page. Shakespeare’s plays were staged to the extent that his works would account for a quarter of all plays performed in the 1740s. In the following century he would reach an elevated status as the greatest British playwright of all time.

More recently, the lost independent films of the 1990s have come to the attention of movie buffs and journalists. These films, like those of earlier time periods, never received home video releases. As such, they don’t have the opportunity that propelled independent films into cult classics. Take the belated success of independent films like 1993’s Mi vida loca by Allison Anders. Mi vida loca was a box-office flop that was panned by critics. Today, the film’s popularity has only grown over time because it was one of the few movies told from a Latina perspective. Screenings and fan events connected to the film have flourished as writers such as Cristela Alonzo cite it as one of the “authentic stories” she respected. With the absence of media preservation, how do “future classics” come into being?

The preservation of media can pay dividends to creatives, as physical media sales prompted the revival of FOX’s Family Guy and a film adaptation of Firefly on the same network. In 2020, Family Guy’s creator Seth MacFarlane was inducted into the Television Hall of Fame. The old adage “vote with your dollars” in terms of determining the consumer’s approval of something rings true.

One remembered work can inspire another. Shakespeare’s The Tempest, the 1611 play largely considered the playwright’s swan song, features a notable speech at the end. The speech, about the renunciation of the magician Prospero’s magic book, is widely regarded as a metaphor for the Bard’s interpretation of the play as his last hurrah. It was notable enough to be featured in an episode of Star Trek: The Next Generation — another show remembered long past its airdate.

Works that are preserved and unfettered by censorship can go on to inspire other timeless works centuries later. With the streaming glut potentially making it harder for series to gain long-term traction, and multiple studios’ investment in streaming resulting in billions of dollars lost, will a handful of woke Twitter personalities permanently alter the film industry and spoil the whole cultural barrel? 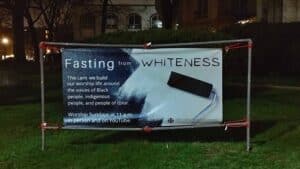 Chicago Church is 'Fasting From Whiteness' For Lent