"We are here and we are not going anywhere until we achieve our objective," said one of the organizers

Organizers of the anti-mandate protest that brought thousands of Canadian truckers to Ottawa say they will stay in the capitol until the nation ends it vaccine mandates.

On Jan. 29, trucks from across the country converged in downtown Ottawa near Parliament. The volume of trucks created serious gridlock.

Some residents have complained about additional noise and pollution. City police have said they are not ticketing vehicles involved in the protest in an effort to avoid aggravating tensions.

In a statement to Ottawa residents, protest leader Chris Barber said. “We understand your frustration … but the responsibility for your inconvenience lies squarely on the shoulders of politicians.”

“We are here and we are not going anywhere until we achieve our objective, to see an end of all COVID-19 mandates and with that a restoration of freedoms of all Canadians,” he said.

Other participants affirmed this sentiment.

“It’s not just about the vaccines. It’s about stopping the public health mandates altogether,” said Daniel Bazinet, owner of Valley Flatbed & Transportation in Nova Scotia to The New York Post.

Prime Minister Justin Trudeau has repeatedly denounced the protestors and their movement.

Trudeau told broadcasters that the movement used “hateful rhetoric” and have been guilty of “abuse toward their fellow citizens.”

“Canadians were shocked and frankly disgusted by the behavior displayed by some people protesting in our nation’s capital,” Trudeau said in a statement on Jan. 31.

Trudeau, who currently has COVID-19, left the city with his family over the weekend. He been mocked for not displaying leadership in light of the grassroots movement.

U.S. Rep. Chip Roy tweeted, “Is there a more gutless and cowardly display than a tyrant on the run?”

What a complete coward. He won’t even face the citizens he has discriminated against. https://t.co/wUTYGL8HqD

The protest has also spread other parts of the country.

The Royal Canadian Mounted Police attempted to break up a blocked made by truckers at the U.S. border on Feb. 1. They eventually stopped after a clash with some drivers. 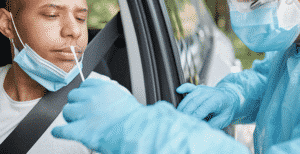