After reviewing the September 2021 incident, the Border Patrol moved to discipline the agents for using “unnecessary” force.

Customs and Border Protection commissioner Chris Mangus notified CBP members that “there is no evidence any agent struck—intentionally or otherwise—any migrant with their reins.”

His memo, obtained by The Washington Free Beacon, states that “a thorough investigation was done despite comments or criticisms made by anyone in the media” although “not everyone will agree with the findings.”

Mangus said “a lack of command and control” led to the Border Patrol Horse Unit from carrying out an operation at the request of Texas DPS.

“We realize the situation in Del Rio at the time of this incident was chaotic, unprecedented, and overwhelming,” Mangus wrote to the agency. “Over the course of several days, approximately 30,000 migrants attempted to enter the United States near the Del Rio International Bridge – which is the largest single mass migration event in our agency’s history.”

“The work you do can often involve making split second decisions,” the commissioner added. “Those decisions are not always judged in context.”

An unnamed senior official told CBS News that “the probe concluded that miscommunication prompted a Border Patrol supervisor to authorize a horse patrol unit to help Texas officials stop migrants from entering the U.S. through the Rio Grande, despite CBP’s policy at the time of allowing migrants to retrieve supplies in Mexico and return to Texas across the river.”

President Joe Biden condemned the border agents after photos of the incident circulated online, saying the agents would “pay” for their actions.

“It was horrible what you see, what you saw — to see people treated like they did, with horses barely running them over and people being strapped. It’s outrageous, I promise you, those people will pay,” Biden said during a press conference.

The photographer who captured the scene, Paul Ratije, said his images had been misconstrued while speaking with KTSM in September. Ratije noted that he did not see any of the agents whip the Haitian migrants.

“He was swinging it. But I didn’t see him actually take — whip someone with it. That’s something that can be misconstrued when you’re looking at the picture,” he said during the interview. “Some of the Haitian men started running, trying to go around the horses, and that’s kind of when the whole thing happened.”

Over the course of nine days, the U.S. deported approximately 4,000 Haitian migrants. 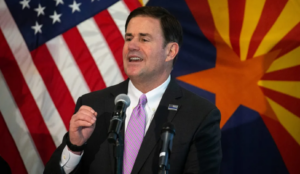