Gary Stephen Maynard became firefighters' second problem as they continue to battle a fire bigger than the city of Houston, Texas

A former college professor was charged with arson after setting a series of fires in a forest near California’s second-largest forest fire.

In a bio on the Sonoma State University website, Maynard taught in criminology and criminal justice department. He has a doctorate in sociology and three master’s degrees.

In a detention memo, Assistant US Attorney Michael Anderson wrote, “Over the course of the last several weeks, Maynard has set a series of fires in the vicinity of the Lassen National Forest and Shasta Trinity National Forest. The area in which Maynard chose to set his fires is near the ongoing Dixie fire, a fire which is still not contained despite the deployment and efforts of over 5,000 personnel.”

After the Cascade Fire began on the western slopes of Mount Shasta on July 20th, authorities who responded to the scene found Maynard underneath a black Kia Soul with its front wheels stuck in a ditch as well as its undercarriage on top of a boulder, per Fox News.

According to court filings, Maynard denied knowing anything about the fire and was “uncooperative and agitated” at various points.

Tire tracks that matched the vehicle were found at a second fire on Mount Shasta the next day.

“In late July, Forest Service agents grew so concerned about Maynard’s actions that they also asked Verizon Wireless for 15-minute updates on his location, 24 hours a day. Eventually, an agent also installed a tracker on Maynard’s car,” reports NPR.

“Where Maynard went, fires started. Not just once, but over and over again,” the government said in a court memorandum arguing for Maynard to be denied bail.

Ultimately, he was arrested Saturday in a closed area near the Dixie Fire. Initially, he was charged with violating a state law that forbids entering a closed emergency area and booked at Lassen County Jail. When police told him they were adding arson to his charges, Maynard became angry and insisted he was innocent.

According to the affidavit filed in the U.S. District Court for the Eastern District of California, he told the deputy, “I’m going to kill you, f***ing pig! I told those f***ers I didn’t start any of those fires!”

Maynard is now also facing federal charges for setting fire to land that’s owned by the U.S. or is under its jurisdiction.

He is being held without bond and will appear in court on August 24. 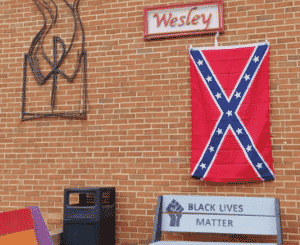