The alleged abuse spanned more than a decade, involving a former student and fellow congregant from his church

Former Michigan state House Speaker Lee Chatfield is being investigated by state police after a woman accused him of sexually assaulting her for more than a decade.

The alleged abuse began when the female victim, the ex-House speaker’s future sister-in-law, was about 14-years old.

According to her lawyer, the female accuser, who is now 26, filed a criminal complaint with the Lansing Police Department, which referred it to state police earlier this week. The lawyer, Jamie White, confirmed the nature of the allegations first reported by Lansing City Pulse.

The accusations claim that Chatfield began molesting her just over a decade ago, and the sexual contact continued until 2021.

The alleged sexual assaults began when the then-14 or 15-year-old teen attended the Northern Michigan Baptist Bible Church and Northern Michigan Christian Academy. The church and school are located near Burt Lake, about 60 miles northeast of Traverse City, White said.

According to his LinkedIn profile, Chatfield taught and coached at the school. He was the athletic director between 2010 and 2014. Chatfield’s father is the pastor of the church, the school superintendent, and a teacher.

Chatfield left his position in the Michigan House in 2020 due to term limits.

“She did what she’s supposed to do. She went to the immediate jurisdiction that she thought was appropriate,” White said. “Her and her family, they’re working through it. They’re looking forward to working with law enforcement to bring this allegation to conclusion and (bring) accountability for others that have been harmed.”

Chatfield was among seven Michigan GOP lawmakers who met with former President Donald Trump at the White House as he tried to overturn Democrat Joe Biden’s win in the state.

Chatfield was first elected in 2014 to represent the 107th House District, which includes the northern counties of Emmet, Chippewa, Mackinac and parts of Cheboygan.

Previously, Chatfield served as speaker pro tempore. He set records as the state’s youngest speaker in more than a century. 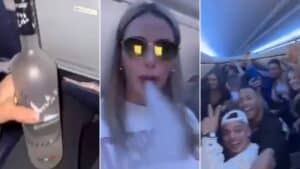