Former Director of National Intelligence John Ratcliffe says that the increased number of UFO sightings may be tied to secret advanced technology being used by foreign governments.

“And I know everyone gets caught up on the alien life and all of that. But my concern as the Director of National Intelligence was, if any one, foreign adversary — regardless of how you define foreign adversary — have technologies that the United States don’t have, we need to find out more about that,” Ratcliffe said in an interview  on Fox News.

His statements came just days after the DNI’s office released a report showing that the number of sightings of Unidentified Aerial Phenomena (UAP) are increasing.

According to the report, as of the end of August 2022, there were a total of 510 UAP reports, including 247 new reports and another 119 discovered or reported after the initial assessment by the DNI’s office.

Intelligence officials say the increase in UAP reporting is due to a better understanding of the possible threats UAPs pose, as well as reduced stigma about reporting.

The annual report states that UAP events are occurring in “restricted or sensitive airspace” raising the possibility that intelligence is being collected and highlighting possible safety concerns for flights.

Most of the new sightings have been from members of the U.S. Navy and U.S. Air Force who encountered the phenomenon during regular operational duties.

Ratcliffe said that after he became DNI, he was the first one to publicly acknowledge the U.S. government maintained a UAP Taskforce, wanting greater transparency for Americans.

We need to have information if there are technologies out there, and very clearly, as this most recent report reveals, the sightings are increasing, which is a good thing, because that means we’re getting more honest reporting from our Navy and Air Force pilots. But it gives us more information, we need to find out when there are and there very clearly are now hundreds of unexplained sightings, meaning that there’s no natural phenomenon involved.

There’s no visual disturbance, it’s not clutter, or debris, or birds or anything else. But objects that demonstrate technologies that seem to defy the law of physics and capabilities that we don’t have as the world’s superpower, you know, our role in the federal government is to provide for the common defense. And we can’t do that if someone else has technologies that are better than we have.

So all of this is a very, you know, a good development from my perspective.

According to the latest annual DNI report on UAP, the Pentagon’s All-domain Anomaly Resolution Office (AARO) — created in July 2022 — will coordinate synchronizing, and standardizing collection, reporting, and analysis of UAP information within the intelligence community and with other agencies, including: the Federal Aviation Administration (FAA), NASA, and the National Oceanic Atmospheric Administration (NOAA). 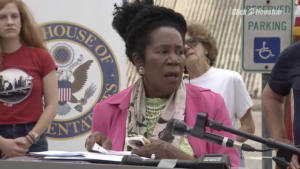