A former linebacker for Virginia Tech University who has been charged with second-degree murder has testified in his own defense.

Isimemen Etute is accused of fatally beating to death Jerry Smith in May of 2021 after he discovered the 40-year-old was a man.

Etute and the 40-year-old had matched on the dating app Tinder while Smith had been using the name “Angie Renee.”

Etute said he had two sexual encounters with the person he believed to be female in court on May 26. During the second encounter, the 19-year-old learned Smith was really male.

“I felt violated,” Etute said told the Montgomery County Circuit Court. “I was just in shock, in disbelief that someone tricked me and lied to me.”

The former football player testified that he did not go to Smith’s apartment with the intent to cause harm, but that he wanted to learn if Smith was male or female.

“During the interrogation, Etute said that after an initial encounter with Smith in April, he decided to return to Smith’s apartment on May 31 after his friends teased him and told him he might have hooked up with a man,” reports WMAL.

The prosecution said on May 25 that Etute flew into a rage when he learned his Tinder match’s true gender.

“Every bone in Jerry’s face was broken,” said Virginia Assistant Attorney Jason Morgan during his opening statement on April 25.

James Turk, Etute’s attorney, said that Smith “lured” his client into a sexual encounter for his own gratification and had a specific interest in young, black men.

“(Smith) was a sexual predator and Isi was one of his victims,” Truck told the court.

Etute has said that after he learn Smith’s true identity, Smith reached under his bed. The former football player said he believed Smith was reaching for a gun.

Turk described Smith as the aggressor, telling the court that the night became violent after Smith lunged forward and  “violently grabbed Etute’s crotch.”

“They swung at me and immediately went to reach,” said Etute while demonstrating in front of the jury. “I thought he was reaching for a gun. That’s just what I know.”

According to Etute, he punched Smith five-times and kicked him so that he could escape the apartment, per KOB4.

While Smith did not own a gun, police found a knife between the mattress and box spring in the apartment.

West Virginia medical examiner Dr. Amy Tharp testified that Smith had multiple facial fractures and brain damage. Tharp said the victim had no defensive wounds and was likely unconscious, but alive, when Etute left the scene, per ABC News. 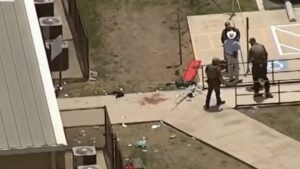