Forbes has removed Ye, formerly known as Kanye West, from their billionaires’ list after Adidas announced that they had canceled their partnership with the mogul.

The German sneaker and sports apparel company announced Tuesday that they would no longer work with Ye because his recent statements have been “unacceptable, hateful, and dangerous.”

The Adidas partnership accounted for $1.5 billion of Ye’s net worth.

The cancelation comes amid calls from celebrities and the Anti-Defamation League for all brands and companies to cease working with Ye over his opinions on the Black Lives Matter movement and claims about Jewish people’s outsized control in the media and entertainment industries.

Adidas had announced at the beginning of October that the relationship with the artist was “under review” after he wore a t-shirt that said “White Lives Matter” during his show at Paris Fashion Week and called Black Lives Matter a “scam.”

During an appearance on the YouTube show Drink Champs earlier this month, which has since been deleted, Ye asserted that “I can say antisemitic things, and Adidas can’t drop me. Now what?”

On Tuesday, Adidas announced that they were terminating their business relationship due to “hate speech.”

“Adidas does not tolerate antisemitism and any other sort of hate speech. Ye’s recent comments and actions have been unacceptable, hateful, and dangerous, and they violate the company’s values of diversity and inclusion, mutual respect and fairness,” the company said in a statement obtained by Vanity Fair.

The German company said that they were immediately ending all production of Yeezy-branded products.

“After a thorough review, the company has taken the decision to terminate the partnership with Ye immediately, end production of Yeezy-branded products, and stop all payments to Ye and his companies. Adidas will stop the Adidas Yeezy business with immediate effect.”

Hours later, Forbes announced that Ye is no longer on their billionaires’ list.

“The $1.5 billion value of the Adidas deal was calculated off of a multiple of annual earnings. Based on interviews with industry experts, Forbes had viewed the royalties Ye received from Adidas to be similar to royalties from music catalogs or film residuals,” Forbes reports. “The Adidas income stream could be sold off, those experts said, just like dozens of musicians (including the likes of Bob Dylan and Bruce Springsteen) have sold off their life’s work over the past two years.”

The report added, “without Adidas, Ye is worth $400 million. The remainder of Ye’s fortune, Forbes estimates, comes from real estate, cash, his music catalog and a 5% stake in ex-wife Kim Kardashian’s shapewear firm, Skims. (A source close to Skims told Forbes Ye hasn’t been involved with the brand since its 2019 launch.)”

“Balenciaga has no longer any relationship nor any plans for future projects related to this artist,” a spokesperson for Balenciaga’s parent company Kering said in a statement to Women’s Wear Daily earlier this month.

Mentions and photos of West had been removed from Balenciaga’s website as of Friday, October 21.

Bank J.P. Morgan Chase also informed Ye that they were closing his accounts and he had until late November to move his business elsewhere. 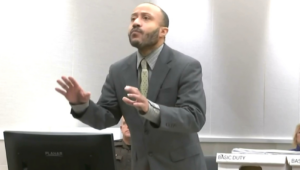