The Food and Drug Administration has banned Juul e-cigarettes, the agency announced on Thursday.

According to the FDA’s press release, all Juul products must be removed from the US market.

“As a result, the company must stop selling and distributing these products. In addition, those currently on the U.S. market must be removed, or risk enforcement action,” the announcement read.

“Today’s action is further progress on the FDA’s commitment to ensuring that all e-cigarette and electronic nicotine delivery system products currently being marketed to consumers meet our public health standards,” said FDA Commissioner Robert M. Califf, M.D. “The agency has dedicated significant resources to review products from the companies that account for most of the U.S. market. We recognize these make up a significant part of the available products and many have played a disproportionate role in the rise in youth vaping.”

The enforcement will only apply to commercial distribution, importation and retail sales of the e-cigarettes. The statement said that the agency cannot restrict individual consumer possession or use, for those who already have them or manage to obtain them.

The FDA stated that Juul “lacked sufficient evidence regarding the toxicological profile of the products to demonstrate that marketing of the products would be appropriate for the protection of the public health.” Specifically, they cited “potentially harmful chemicals leaching from the company’s proprietary e-liquid pods,” which they said have not been through a full toxicological risk assessment.

The agency added that they have not received clinical information to suggest an immediate hazard associated with the use of the JUUL device or JUULpods, but that there is “insufficient evidence to assess the potential toxicological risks.”

“The FDA is tasked with ensuring that tobacco products sold in this country meet the standard set by the law, but the responsibility to demonstrate that a product meets those standards ultimately falls on the shoulders of the company,” said Michele Mital, acting director of the FDA’s Center for Tobacco Products. “As with all manufacturers, JUUL had the opportunity to provide evidence demonstrating that the marketing of their products meets these standards. However, the company did not provide that evidence and instead left us with significant questions. Without the data needed to determine relevant health risks, the FDA is issuing these marketing denial orders.”

The FDA recommended that Juul users switch to other companies that make vapor nicotine products, including those made by NJOY and Vuse, which have been approved for sale by the agency.

A 2019 study conducted by Celerion found that cigarette smokers who switched entirely to Juul reduced their exposure to biomarkers, or signals of exposure to cigarette smoking, 99.6 percent as much as abstaining entirely from cigarettes, according to a report from CNBC.

The report also noted that a study published last month in the New England Journal of Medicine “showed e-cigarettes were nearly twice as effective as nicotine patches, gums and similar therapies in helping people to stop smoking. However, an accompanying editorial penned by professors from the Boston University School of Medicine urged doctors to use caution when recommending e-cigarettes for smoking cessation.”

The FDA has also announced a plan to force companies to lower the nicotine content in traditional cigarettes.

The nicotine limit was announced in the agency’s biannual regulatory agenda.

According to the notice, obtained by The Hill, the FDA will propose by 2023 “a tobacco product standard that would establish a maximum nicotine level in cigarettes and certain finished tobacco products.”

The plan is to lower the amount significantly enough that it will make them less addictive.

“Because tobacco-related harms primarily result from addiction to products that repeatedly expose users to toxins, FDA would take this action to reduce addictiveness to certain tobacco products, thus giving addicted users a greater ability to quit,” the announcement continued.

“The proposed product standard is anticipated to benefit the population as a whole while also advancing health equity by addressing disparities associated with cigarette smoking, dependence, and cessation,” the FDA added. 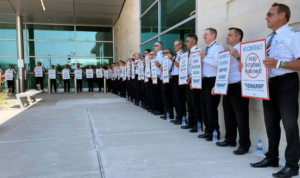