More than 1,300 pilots who feel they are overworked gathered outside the airport where the company is headquartered and held signs objecting to Southwest.

The pilots held signs with messages like, “Our passengers and pilots deserve better,” “Summer of Luv: delayed, rescheduled, canceled,” and “Southwest’s Operations: From First to Worst.”

The demonstration was organized by the Southwest Airlines Pilots Association, which has been negotiating a new contract with the airline for the last two years.

Like most major airlines, Southwest has been plagued by delays and cancellations due to staffing shortages. SWAPA has argued the company’s poor scheduling practices have made the already strained situation worse, per The New York Post. There are an estimated 8,300 members of the union in total who are frequently reassigned or given last-minute assignments to cover staffing gaps and weather-induced scheduling issues.

“Southwest Airlines respects the rights of our Employees to express their opinions, and we do not anticipate any disruption in service as a result of this single demonstration,” the airline said in a statement to the outlet. “For 51 years, we’ve maintained a legendary Southwest Culture that honors our valued Employees.”

SWAPA president, Captain Casey A. Murray, told NBC News that the unpredictable schedules and lack of timely communication from Southwest have left pilots feeling “under a lot of stress for the past year.”

“What is going on, on a day-to-day basis, is a wasteful use of the pilot resources they have,” Murray said in a June 17 interview. He noted that on an average day, 30% of pilots are reassigned to make up for the pilot shortage.

Murray called the working conditions a “flightmare” with the union noting pilots reported feeling “fatigued at more than triple the rate of a year ago,” per USA Today.

As travel restrictions implemented following the outbreak of COVID-19 in 2020 are repealed, demand for air travel has increased.

“Many forecasters believe the number of travelers will match or even surpass levels in the good-old, pre-pandemic days,” reports CBS News. “However, airlines have thousands fewer employees than they did in 2019, and that has at times contributed to widespread flight cancellations.”

Flight tracking website FlightAware reported that over 7,000 flights were canceled during Memorial day weekend, May 27-30.

The industry’s problems have continued in more recent weeks. Business Insider reported that between June 16 and June 20, US airlines canceled or delayed over 35,000 flights.

“The weekend’s disruptions come as many blame labor shortages and staffing issues as a common denominator, though bad weather and the economic fallout of Russia’s ongoing war against Ukraine have also been cited as reasons for the headaches,” Insider noted.

Southwest is not the only airline to receive public complaints from its pilots regarding staffing issues.

On June 16, pilots from Delta Airlines published an open letter to customers who have been impacted by travel interruptions. The group noted they were “disheartened” customers’ plans have been “disrupted” and added that the company’s pilots “empathize and share [their] frustration over the delays, cancellations, and disrupted travel plans.”

“We agree; it is unacceptable,” the pilots noted.

“We have been working on our days off, flying a record amount of overtime to help you get to your destination,” the group added. “At the current rate, by this fall, our pilots will have flown more overtime in 2022 than in the entirety of 2018 and 2019 combined, our busiest years to date.”

The pilots warned that management at Delta needs to take action to ensure “the integrity of the operation … before you lose confidence in the Delta brand.” 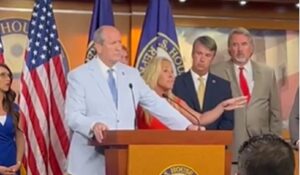 Rep. Marjorie Taylor Greene Tells British Reporter to 'Go Back to Your Own Country,' After She Appeared to Advocate for Gun Control